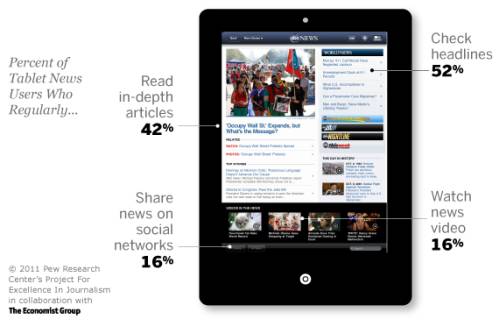 There’s been a lot of talk about tablets such as the Apple iPad and Android tablets saving the news industry. Apple incorporated a Newsstand into iOS 5, which lets customers subscribe to digital magazines and newspapers and keep them organized. Zinio and other companies have created periodical stores for tablets. And a number of publications including the New York Times, The Daily, and Wired Magazine offer their own subscription-based apps for tablets.

The Philadelphia Inquirer and Daily News even went as far as to offer subscribers a $99 tablet when they sign up for digital news subscriptions, and the Tribune Company plans to offer something similar soon.

Now there’s research that shows people do love to use tablets to get the news. What’s more, they don’t just read the headlines — they’re more likely to read long, in-depth articles on a tablet than on a computer.

Pew’s Project for Excellence in Journalism and The Economist Group conducted surveys of 1,159 tablet users this summer and fall. Here are a few of the highlights from the study:

In other words — while the study shows that people (especially people who are already news consumers) like using tablets to consume news… and even that they might consume more news if they have a tablet, it doesn’t look like there’s strong evidence that people are willing to pay more for their news.

As print newspaper and magazine subscriptions decline and publishers have to contend with competition from free news sources on the internet, it doesn’t look like tablets alone are going to change things. But the truth is that good, in-depth reporting costs money, and if every last newspaper went belly up tomorrow, the quality of free content on blogs and news aggregators would take a serious nose-dive. Much of the best reporting still comes from mainstream news sources.

Unfortunately it looks like publishers hoping that tablets were the solution to their financial woes might want to hedge their bets with… something else.

That said, while this survey is informative, it primarily looks at early adopters. Tablets are still relatively new devices and our relationship with them will likely grow and change in the coming years if they stick around for the long run. Web publishers, app designers, and tablet makers will likely continue to come up with new uses for the devices, as will consumers.

Of course, if Pew’s study targeted early adopters by identifying random tablet owners, I kind of wonder what Liliputing readers are using tablets for. I suspect y’all are even earlier adopters. So in a completely unscientific, non-random, self-selecting survey… why don’t you let me know what you use your tablet for on a daily basis.