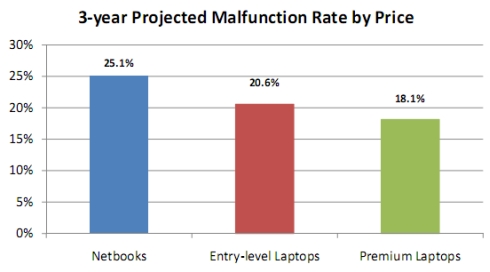 SquareTrade provides warranties for computers. So the company’s in a pretty good position to know how frequently different types of machines break down. And the company recently put out a study with data showing that almost a third of all laptop owners “reported a failure to SquareTade” within the first 3 years of purchasing a notebook. That’s not the most surprising stat I’ve ever read. Now here are a few more more stats from the study:

Now, that said, SquareTrade uses a very general definition of a netbook. Basically, it’s a laptop that costs less than $400.

Some machines that I would say are definitely netbooks (thanks to small size, light weight, and relatively cheap price, cost closer to $500. And there are plenty of 12 inch and larger laptops that are available for under $400, but which are definitely not netbooks. It’s not clear whether these were grouped into the category for the purposes of this report.

But you know what? The study basically makes the claim that cheaper laptops break more frequently than expensive laptops. Not only am I not surprised to see these results, but I’m kind of relieved. I should certainly hope that if you pay $1000 for a notebook that it would be designed to be more durable than a $300 model.

16 replies on “Study: Netbooks fail 20% more than other laptops”