There are a growing number of relatively inexpensive mini PCs with multiple Ethernet ports, allowing you to build your own router, firewall, or other networking appliances. But Storaxa goes further than most.

It has four 2.5 GbE Ethernet ports and support for WiFi 6, allowing you to use it as a networking device. But it’s also designed to be used as a NAS (network attached storage) device, with 5 bays for hard drives and 4 M.2 connectors for solid state storage. Storaxa is expected to have a retail price of $399 when it ships this summer, but the makers of this NAS/router are offering discounts to backers of a Kickstarter crowdfunding campaign. 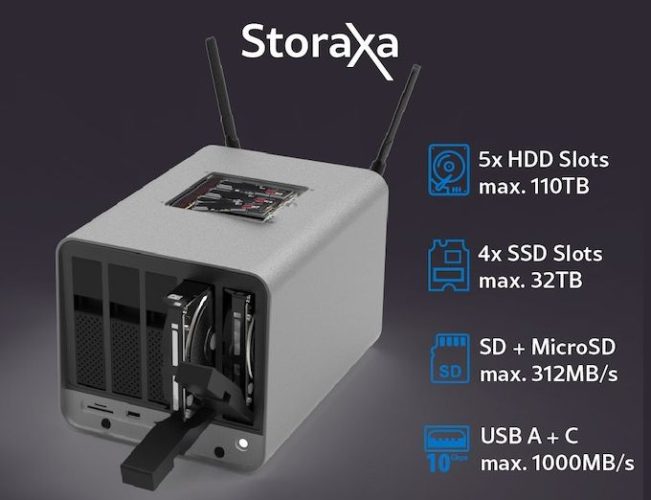 Super Early Bird rewards started as low as $219 (45% off), but those rewards have all sold out. As I write this article, backers can still save 40% off the retail price by backing the campaign with a pledge of $239. After that reward runs out, the crowdfunding price goes up to $279 (or 30% off the retail price). Shipping to the United States will add an extra $25, while shipping to most other regions costs $35.

Just keep in mind that backing a Kickstarter campaign isn’t quite the same thing as pre-ordering a product. There’s a chance that there might be delays, the product might not live up to expectations, or it might never ship at all. But in this case the developers say they have a manufacturing partner lined up and that the “biggest risk is that we have to manufacture and ship in batches if we can’t get all the components we need for one big production run.” 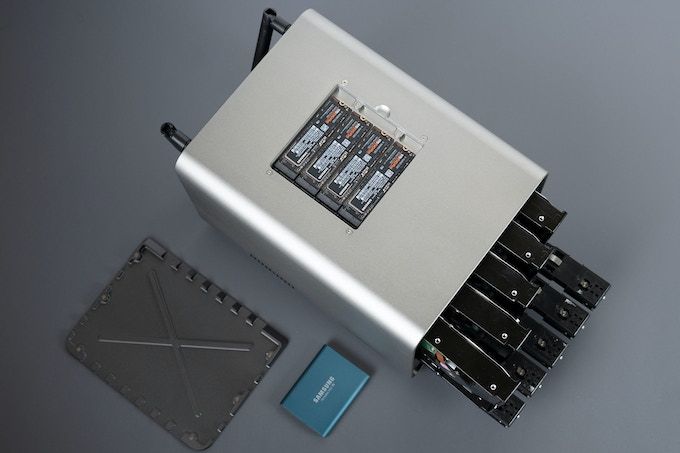 The prices above are for a barebones Storaxa device that ships without any storage. But you can pay extra for an add-ons that include a second unit (for $199 + $20 for shipping) or 8TB of solid state storage ($350 for four Kingston NV2 2TB SSDs).

Each model features 16GB of DDR4-3200 memory and support for up to five 3.5 inch SATA hard drives and up to four M.2 2280 PCIe NVMe SSDs. While the base version of the Storaxa is powered by a 10-wat Intel Pentium Silver N6005 processor, as part of a stretch goal, the developers are considering offering a 15-watt AMD Ryzen 7 5825U upgrade option for backers who’d prefer a higher-performance processor.

Here’s an overview of key specs for the Storaxa:

The system supports RAOD 0, 1, 5, 6, and 10 data configurations, allowing you to maximize the storage capacity and/or set up redundant storage to prevent data loss.

In terms of software, Storaxa should support a wide range of applications, but the default setup consists of a Proxmox Virtual Environment that runs TrueNAS-Scale for storage & server management and OpenWrt for router operations.

On paper the Storaxa system looks like it offers a heck of a bang for the buck. You could easily spend $700 or more on a Synology or QNAP NAS that lacks many of the Storaxa’s features. But if you did opt for a system from a more established company, you’d also have a better idea of what kind of support to expect and you wouldn’t have to wait until this summer to find out if a crowdfunded product will ship.