Google is bringing support for Steam gaming to more Chromebook users staring with the rollout of ChromeOS 108.

When Steam for Chromebooks first launched earlier this year, it was only available for a handful of devices and users had to be willing to run Alpha software on potentially unstable Dev Channel builds of ChromeOS. But now Google is bringing support for Steam to ChromeOS Beta versions 108.0.5259.24 or later, announcing performance improvements, and adding support for more Chromebooks. 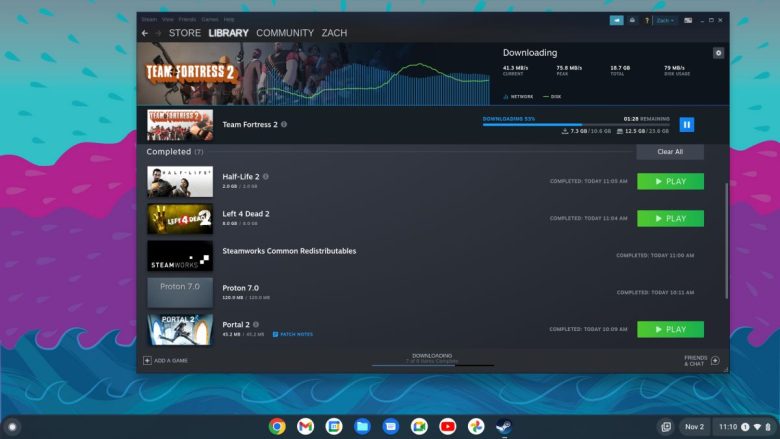 The move from Dev Channel to Beta channel will allow users who are a little more cautious (but still willing to take a few risks) to try out Steam on Chromebooks.

As for the new hardware requirements, previously you needed a device with an 11th-gen Intel Core i5 or better processor. But now Google says you can use Steam on Chromebooks with:

Google says this effectively triples the number of Chromebooks that work with Steam with support for new models including the recently launched Acer, Asus, and Lenovo Gaming Chromebooks.

But the company also notes that some games may not work on systems that only meet the minimum specs, so Google recommends using a device with at least 16GB of RAM and a Core i5 or Ryzen 5 processor for best performance.

Also keep in mind that while Steam for Chromebooks has graduated from Alpha to Beta status, it’s still not considered stable and there are a number of known issues. For example, external displays and storage aren’t supported yet. Some gamepads may not work properly. Steam voice chat audio quality is described as “poor.” And performance can be wonky for the first few minutes in some games.

You can find more details including a list of supported Chromebooks, known issues, and games that the Chrome OS team has tested at Chromium.org. That’s where you can also find instructions for installing the Steam game client on supported Chromebooks (including recent models from Acer, Asus, Framework, HP, and Lenovo).