Valve’s Steam Deck is a handheld gaming PC with a 7 inch display, built-in game controllers, a custom AMD processor with RDNA 2 graphics, and a starting price of $399, which makes the Steam Deck one of the most affordable devices in its category.

But the entry-level model has just 64GB of eMMC storage, which means you have to pay $529 or more to get a version with a faster, higher-capacity PCIe NVMe solid state drive. The good news is a new video from Valve shows exactly how to open up the Steam Deck and add or upgrade an SSD. The bad news is Valve highly recommends you don’t actually do that, since there’s a high risk that you’ll damage your device. 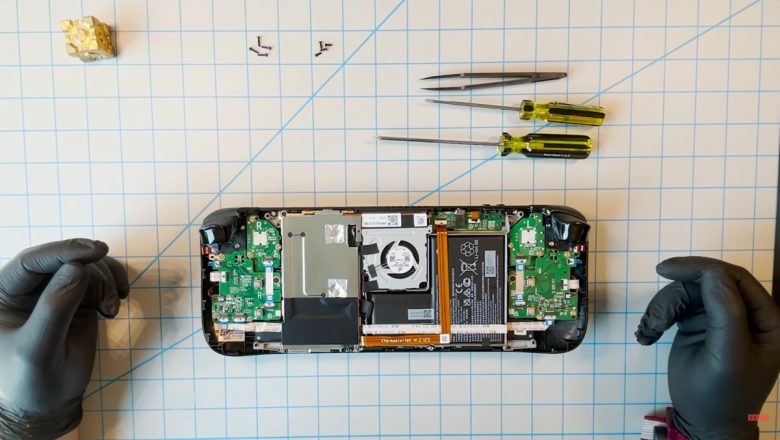 Unlike most companies advising against opening up your hardware, Valve notes that once your Steam Deck arrives, it is yours, and you can do whatever you want with it. But the company also says the warranty doesn’t cover any damage you do if you open the chassis to perform repairs or upgrades and something goes wrong.

The Steam Deck is a compact device with a lot of components crammed into a small space, and the company notes that once you’ve opened the case, you’ll immediately weaken it structural integrity, making it less drop resistant.

As for SSD upgrades, the company notes that there are multiple potential issues with replacing the SSD using an off-the-shelf version:

The Steam Deck also uses an M.2 2230 SSD, which an unusually small and uncommon type of solid state drive, so it’s not like there are as many third-party options for this type of storage as there would be if the company was using an M.2 2280 drive (the size more commonly found in laptops).

Interestingly, Valve notes that even the $399 Steam Deck with eMMC storage uses an M.2 connector, so if you disregard all of the company’s warnings and open the chassis, you should be able to upgrade that model by adding an SSD.

Valve also used some custom components, which means that even if you do manage to open the case, you may not be able to easily perform repairs. The analog thumb sticks, for example, are all part of one assembly featuring a board, stick, and cap and the only officially compatible replacement will be the exact same type of thumb stick.

The company says it will eventually let customers know where they can buy replacement components including thumb sticks and SSDs, even if Valve only recommends experts perform repairs or upgrades.