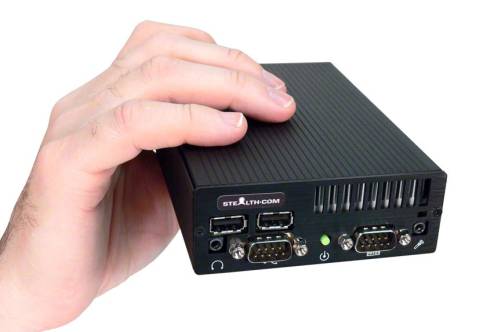 Stealth Computer has a long track record of releasing rugged and industrial computers, including a line of mini PCs for use in vehicles or other tight spaces. Now the company has introduced a new model called the LPC-125LPM which is a pretty nifty looking little computer. It measures 6.1″ x 4″ x 1.45″ and weighs just 1.2 pounds and has a rugged design.

The computer also has a fairly high price tag given its specs. Stealth is charging $895 for the LPC-125LPM with a 1.8 GHz Intel Atom D525 dual core processor, 2GB of DDR3 memory, and a 55GB solid state drive. And that’s the price before you add an operating system.

To be fair, the price includes a rugged case, RS232 ports, a VGA port, ExpressCard/34 slot, an internal mini PCIe slot, and brackets for mounting the computer to a wall or the back of a display. It also includes a power interface that controls the system startup and shutdown when power is interrupted — which can come in handy if you’re using the device in an automobile or other mobile environment.

The computer isn’t really meant for consumers, who can probably pick up a low cost nettop with better specs for about a third of the price. Stealth is targeting customers looking for computers that can be used in digital signs, kiosks, point-of-sales machines, or other commercial or industrial settings.

6 replies on “Stealth introduces low-power mini mini PC, charges an arm and leg for it”