The VisionFive 2 features a 1.5 GHz quad-core RISC-V processor, support for up to 8GB of RAM, and a GPU with 3D graphics support. It’s expected to sell for around $55 and up, but the VisionFive 2 is up for pre-order for $46 and up through a Kickstarter crowdfunding campaign. 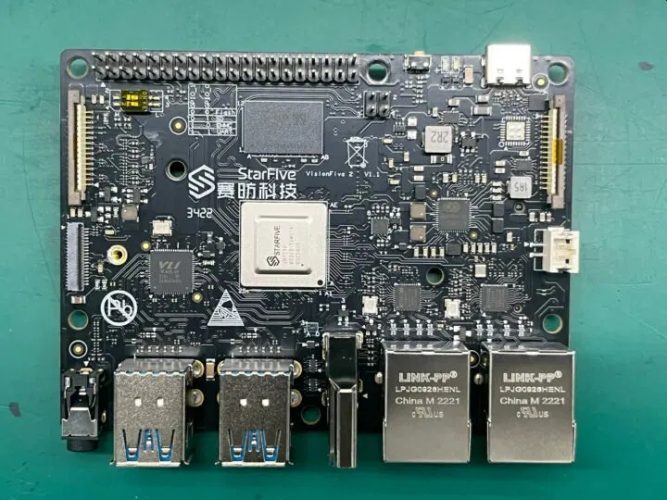 The starting price is for a model with 2GB of RAM, but there are also configurations with 4GB or 8GB of RAM. Pricing largely depends on when you place your order, but the best deal may be the Super Early Bird special that lets the first 2000 backers pay $49 + shipping for a 4GB model that has a retail price of $65.

StarFive expects to begin shipping 4GB models to Kickstarter backers in November, 2022 but folks who want one of the other models will have to wait until February, 2023. 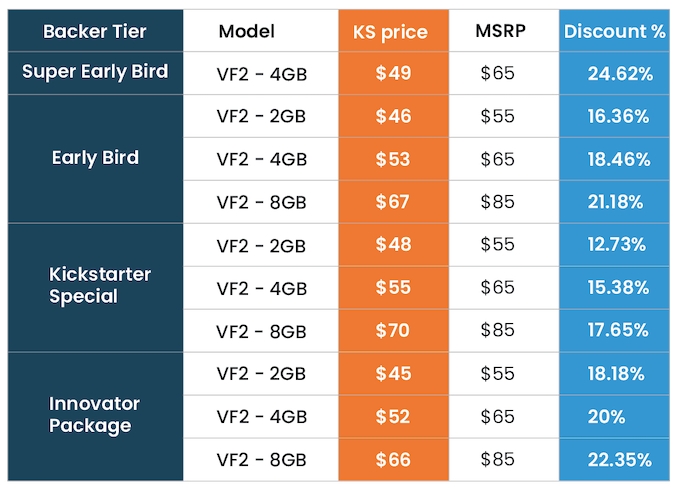 All models feature a microSD card reader and eMMC socket for storage, plus a PCIe 2.0 x2 M.2 M-Key that can be used for an SSD and a QSPI flash module for the U-boot bootloader.

Other features include a 40-pin GPIO header, 4-lane and 2-lane MIPI-DSI display connectors, a MIPI-CSI connector, fan header, and a set of ports that include:

At the heart of the system is a SstarFive JH7110 chip with four SiFive U74 CPU cores and  Imagination BXE-4-32 graphics with support for Vulkan 1.2, OpenGL ES 3.2 and OpenCL 1.2 graphics.

While the chip isn’t exactly a speed demon, it should offer a significant performance boost over the dual-core JH7100 chip used in last year’s model when it comes to multi-core performance and an even bigger boost in graphics performance (as the previous-gen chip didn’t have an integrated GPU). According to a vague set of benchmarks released by StarFive, CPU performance should be lower than what you’d expect from a Raspberry Pi 4, but roughly on par with a system featuring ARM Cortex-A57 CPU cores.

StarFive plans to offer operating system images based on Debian and Fedora Linux, and this month Canonical suggested that the Ubuntu image it recently released for the VisionFive v1 could be compatible with the newer, more powerful version.

And perhaps most importantly, the VisionFive 2 is one of only a handful of affordable computer boards to feature a RISC-V processor, so it could provide a way for developers and enthusiasts to dabble with the open instruction set architecture without breaking the bank.

via CNX Software and RVspace