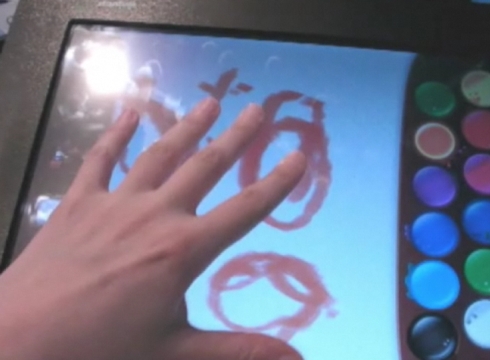 There are all sorts of touchscreens out there. But one of the biggest lines diving, say, an iPhone touchscreen from those found on many tablets, notebooks, and Windows Mobile phones is the line between screens that accept stylus input and those that are finger-friendly. It’s rare to find a touchscreen that can handle both types of input, which is a shame because would be nice to be able to draw on a touchscreen with a stylus then put it down for a moment to type on an onscreen QWERTY keyboard with your fingers.

But it turns out there is a type of touchscreen that can handle exactly that kind of usage. French display maker Stantum has a multitouch display that can handle both types of input. What’s more, the Stantum display can recognize up to 10 simultaneous inputs, which means you can tap away with all of your fingers at once. If that’s the kind of thing you’re likely to do.

Stantum has been making screens like these for more than half a decade, but the folks at Laptop Magazine caught up with the company at Mobile World Congress this week and found that Stantum is partnering with global chip makers that could allow the screens to show up in laptops and tablets soon.

The latest version of the touchscreen also recognizes pressure-sensitive finger input. In other words, a light press generates a light line or dot while pressing down harder nets you a thicker line on the display.

You can watch a video of the screen in action at Laptop Magazine’s web site.