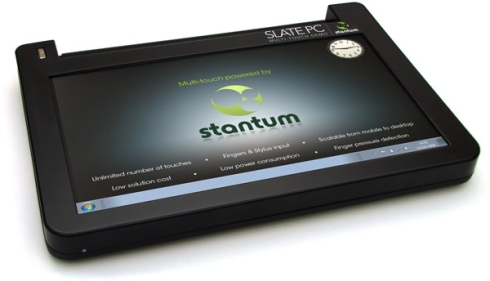 There’s no shortage of DIY projects for turning netbooks into tablets by hacking off the keyboards and adding a touchscreen display. But Stantum is one of the first companies I’ve seen that is actually offering a 10 inch tablet that’s specifically built out of netbook parts – the Dell Inspiron Mini 10 in this case.

To be fair, the Stantum Slate PC is described as a “proof of concept” device, and while there’s a page for ordering an evaluation unit, no price is listed and it’s not clear that the Slate PC is meant for mass production. Rather, it’s a demo product that shows what a Stantum Slate could be… I’m  guessing that Stantum would be able to order its own netbook guts from Taiwanese PC makers if there was enough demand for this thing. But that doesn’t make the demo units any less cool.

The Slate PC features a multitouch screen that can handle 10 simultaneous touch points. it features finger-pressure detection and can handle both finger and stylus input. It supports Windows 7 out of the box with no special drivers required.