Need a second screen for your laptop or a portable display for viewing presentations, videos, or games running on your phone or tablet? There are a number of portable monitors on the market, including some that draw power directly from your device via USB.

But SPUD is something a little different: it’s a portable screen that has a bigger display area than most… but which also collapses into a compact, book-sized package for easy portability.

The makers of the Spontaneous Pop Up Display (SPUD) are launching a Kickstarter campaign today. 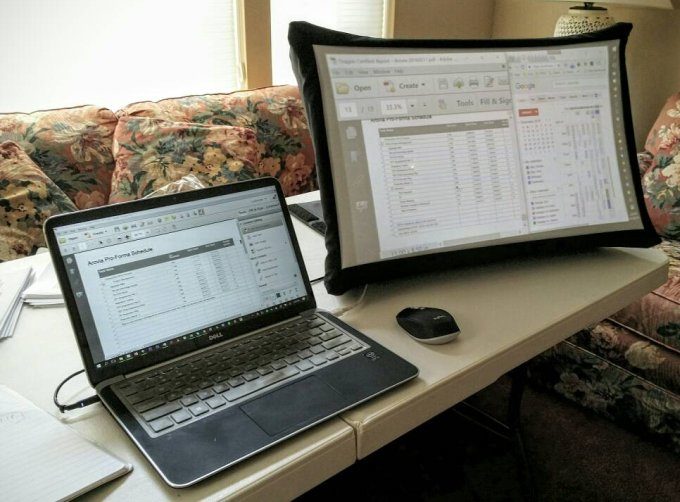 Backers will be able to reserve one of the pop-up screens for a pledge of $399, which the team says is $100 off the eventual retail price.

That makes SPUD pretty expensive for a portable monitor, especially when you take a closer look at some of the display’s features. But since most portable monitors are 17 inches or smaller (and don’t generally fold up into more compact sizes), there’s not really anything else on the market that works quite like a SPUD, it might not be entirely fair to make that comparison.

So here’s how SPUD works: it’s basically a rear-projection display that collapses and expands around an umbrella. The projector is built into the back of the device and supports brightness levels between 100 and 225 lumens.

It projects at a 1280 x 720 pixel resolution, accepts HDMI or wireless input, and has a battery that’s good for up to 4 hours of run time.

Since this is a projector, it’s going to look better in some environments than others. Even some of the developers’ own promotional images show a display that looks pretty dull from some angles.

And while SPUD is pretty compact when folded up, it’s actually a bit bulky when expanded, looking more like a CRT monitor than a thin LCD display.