The fourth-biggest wireless carrier in the US says it’s new LTE Plus network is one of the fastest in the country… but that doesn’t do the company much good unless it can attract customers. So Sprint is launching a pretty big sale to promote the launch of its new network: switch to Sprint from one of the top three wireless carriers and the company promises to cut your phone bill by 50 percent. 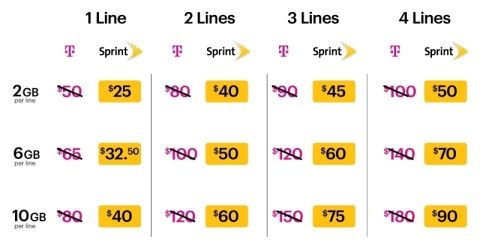 Sprint will pay you up to $650 to cover any early termination fees from your existing carrier. But there is some fine print:

Sprint says the half-price deal is also good for Cricket and MetroPCS customers that port their phone numbers… but existing Sprint subscribers don’t get a discount. Instead, the company is offering existing subscribers a free Alcatel OneTouch Pixi 7 tablet plus a free year of wireless service (but only if you agree to a 2-year contract, which means you will have to pay for 1 year of service).

The good news is that if you’re not happy with the service you have 28 days to back out of the deal: Sprint says there’s no restocking fee if you return a device within that time.

11 replies on “Sprint says it’ll cut your phone bill in half if you switch from AT&T, Verizon, or T-Mobile”