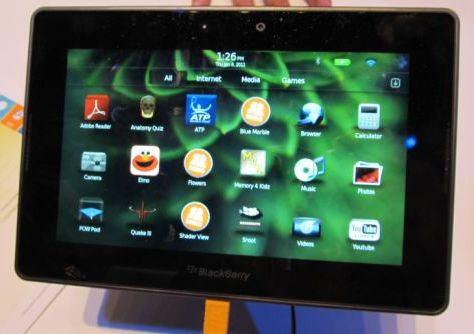 Sprint announced plans way back in January to carry a version of the BlackBerry PlayBook with built-in support for Sprint’s 4G WiMAX mobile broadband network. If you’ve been holding your breath for the last 8 months you might as well exhale, because it turns out it’s not going to happen. Sprint has canceled plans for offer a WiMAX version of the tablet.

The BlackBerry PlayBook is Research in Motion’s first 7 inch tablet. It runs BlackBerry Tablet OS, based on QNX software, and it’s meant to work both as a standalone device for surfing the web, viewing media, or surfing the web, and to be paired with a BlackBerry smartphone for email, calendar, and other business and personal information management features. Soon RIM also plans to offer a utility that will allow users to install and run Android apps on the tablet.

Sprint was expected to be the first US carrier to offer a version of the tablet with support for mobile broadband. Now that Sprint has canceled that plan, the PlayBook remains a WiFi-only device in the US (unless you pair it with a smartphone to share an internet connection).

As the Wall Street Journal reports, this is bad news for RIM — not only because it means there won’t be a 4G model for sale in the US, but also because it means that Sprint won’t be marketing the tablet. That means if RIM wants to sell PlayBooks the company is going to have to handle all the promotion itself.

Update: RIM tells GottaBeMobile that the company is still working on a 4G tablet… but it’s focusing on LTE rather than WiMAX technology. Right now Verizon is currently the only US wireless carrier with a 4G LTE network, but several others are expected to roll out LTE service eventually.