Spotify‘s free, ad-supported app for desktop users offers the ability to listen to any song at any time, as long as you’re willing to listen to ads after every few songs. But the company’s mobile apps for Android and iOS have typically been more restricted: you could shuffle songs in a playlist, but if you wanted to play specific tracks on demand, you had to pony up some cash for a Spotify Premium subscription.

Today the company’s changing that by bringing support for on-demand playlists to mobile users.

It allows you to pick specific songs in a playlist or play a set of songs in any order you like… but it’s still not quite as open as the free desktop experience. 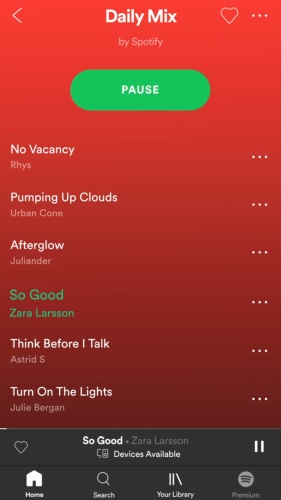 That’s because you can’t just search for a song and hit play to hear it… unless it’s already in an on-demand playlist.

Still, there’s a pretty good chance you’ll find something you want to hear. Spotify will offer free users access to 15 playlists, including personalized lists such as Discover Weekly, Release Radar, and Daily Mix. Other playlists include popular mixes such as Rap Caviar and Ultimate Indie.

All told, each user should have access to hundreds of on-demand tracks for around 40 hours of on-demand music, with many based on their own listening habits.

That’s sort of like having about 60 CDs worth of music that you can play at any time.

Since the playlists change on a regular basis though, a song you heard last week might not be included in your list this week.

If you’d rather have something a bit closer to access to any song ever recorded that you can ply at any time, you’re probably better off just using YouTube. Just keep in mind that if you’re using YouTube on a mobile device, songs will stop playing if you navigate away from the app unless you pay for a YouTube Red subscription (or use a third-party YouTube app that supports background audio).

Spotify says its new free mobile experience will roll out globally to Android and iOS devices in the next few weeks.