Intel is set to launch its next-gen series of Core family processors later this year. Code-named Skylake, the new 6th-gen Core chips should offer improved performance and efficiency over the Broadwell chips that are currently on the market.

While Intel typically sells chips and not full-fledged computers, the company as offered a line of small desktop computers under its NUC brand for the past few years. And according to Fanless Tech, the first NUC systems with Skylake chips should launch in the 3rd quarter of 2015. 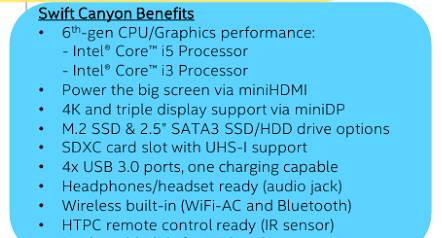 That’s when Intel is expected to release a model with an Intel Core i3 Skylake series chip, according to a leaked roadmap. A more powerful model with a Core i5 chip should be available in the fourth quarter of 2015.

Both models will use 15 watt processors that are part of the Skylake-U family of low-power chips aimed at notebooks and energy-efficient desktops.

Other features will include support for up to 32GB of dual-channel DDR4 1866 MHz memory support, fan M.2SSD card slot, a 2.5 inch drive bay (at least on some models), our USB 3.0 ports, mini DisplayPort 1.2, mini HDMI 1.4a, and an SDXC card reader. Like Intel’s Broadwell NUC models, the new Skylake versions will have upgradeable lids that let you change the color or add features such as NFC.

The systems will be available with Gigabit Ethernet, 802.11ac WiFi, Bluetooth 4.0, and Intel WiDi wireless display technology. There’s also an IR sensor in case you want to use an NUC as a home theater PC with an IR remote control.

You can find the full leaked roadmap and more details at Fanless Tech.