Samsung may have been the first company to release an octa-core ARM-based processor, but up until now you’ve only actually been able to use 4 processor cores at a time on an Samsung Exynos 5 Octa chip. That will change soon, when Samsung launches support for what it’s calling Hetereogenous Multi-Processing, or HMP. 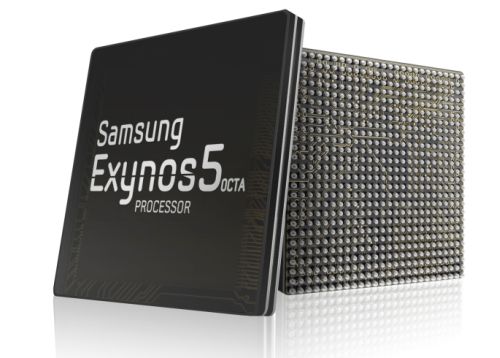 In a nutshell, the company’s 8-core chips consist of 4 ARM Cortex-A15 CPU cores and 4 ARM Cortex-A7 processor cores. The A15 components offer higher performance, while the A7 cores use less power. So for basic tasks, your phone or tablet can use the A7 bits, but the Cortex-A15 parts kick into action when you’re running games or other tasks that require a bit more power.

Samsung tapped ARM’s big.LITTLE technology to pair those low-power and high-performance processors cores in a single chip. But there are a few different ways to implement big.LITTLE architecture, and so far Samsung’s chips have basically been using just one option: either the 4 Cortex-A7 cores are in operation, or all 4 Cortex-A15 cores are. There’s been no way to use all 8 chips at once, so at most you had 4 processor cores working for you.

Samsung’s HMP update will allow devices to use all 8 cores at once, automatically assigning the Cortex-A15 cores to high-priority tasks, and the lower-power Cortex-A7 cores to lower priority or simpler tasks.

HMP is basically a software update, and it’s due out in the 4th quarter of 2013. But Samsung hasn’t made it clear if the update will be available for the Exynos 5410 octa-core chip that launched earlier this year or if it’ll be restricted to the newer Exynos 5420 or later chips.

Update: It looks like HMP will only be supported on the newer Exynos 5420.

Update 2: Or maybe not… Meizu uses the Exynos 5410 chip in its MX3 smartphone, and the Chinese company says it’ll be able to enable HMP through a software update. [via GizChina]