Since the launch of Android 6.0 Marshmallow, Google’s mobile operating system has supported “adoptable storage,” allowing users of some phones to use a removable microSD card as if it were internal storage. But not all microSD cards are equal… and some are so much slower than the built-in storage in a phone that using the card will drag down performance significantly.

So the SD Association has unveiled a new specification designed to help you figure out before you buy an SD card whether it’s fast enough to use to store and run applications.

Soon you may start seeing the App Performance logo on cards that meet the new spec. 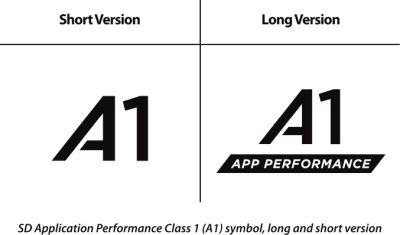 In order to be certified as App Performance Class 1 or A1, an SD card needs to support:

The new standard is part of the SD Specification 5.1 and in the future SD card makers will be able to use the new logo to show that their cards meet the minimum requirements.

For now, I suspect the new standard could just make things more confusing for shoppers. There are already plenty of SD cards on the market that meet those minimum requirements, but which don’t have an A1 logo on them, because the spec didn’t exist when those cards were manufactured, stuffed into packaging, and put on store shelves.

Maybe in a year or two most of that inventory will be sold off, but for now it’s not like you can glance at a package, see that it lacks a logo, and know that it means you should only buy that card if for storing data rather than for running apps.