Sony’s BRAVIA Smart Stick is the smallest Google TV device to date. It looks more like a chunky, awkwardly-shaped USB flash drive than a set-top box. But the little device packs all the power of Google TV, letting you stream internet video, search your cable listings, and run select Android apps on your TV.

Priced at $150, the Smart Stick is a little cheaper than Sony’s larger Google TV devices such as the NSZ-GS8. There’s a small catch though: The BRAVIA Smart Stick will only work with some televisions. 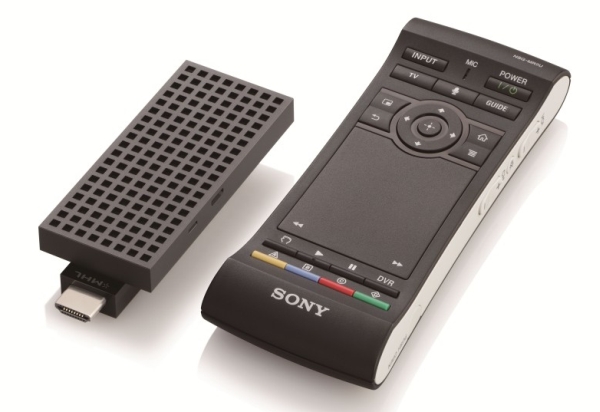 Update: It turns out the Smart Stick does drawer from a USB cable, so I have no idea why it would only work with recent Sony televisions.

The BRAVIA Smart Stick has 8GB of built-in storage and comes with a wireless remote featuring a QWERTY keyboard on one side and a clickable touchpad and media buttons on the other. It also has a mic which you can use for voice controls.

The device features and HDMI input and IR blaster, which lets you control your cable or satellite box, while viewing the Google TV user interface and Sony BRAVIA apps on top of your normal TV service. There’s also a picture-in-picture feature which lets you surf the web while watching TV.

While there are plenty of other Google TV devices on the market, the Sony BRAVIA Smart Stick stands out because of how little it stands out — the small size makes it not all that much bigger than a Chromecast. But since the Smart Stick runs the full Google TV experience, it can run many apps that aren’t currently available for Chromecast, and it doesn’t require you to use a phone, tablet or PC as a remote control.

On the other hand, you can get a similar experience for about half the price by picking up a Vizio Co-Star Google TV box from Walmart for $78.

Previously: Sony BRAVIA Smart Stick is a Google TV box… in a stick