The FES Watch made its debut on Japanese crowdfunding site Makuake and later appeared on Sony’s own crowdfunding site, First Flight. This month it finally goes on sale. However, it will only launch in Japan and only be available at two locations, at least for now. 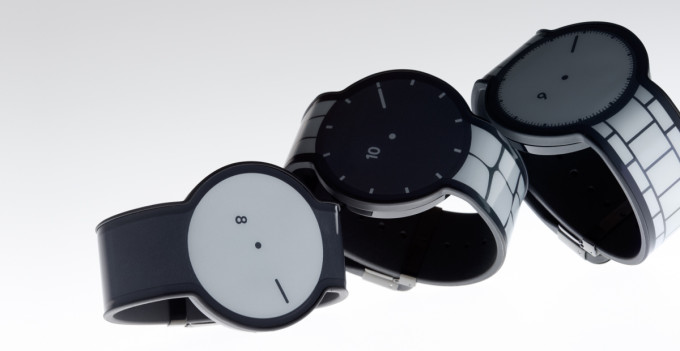 The digital design company has choses the Museum of Modern Art (MoMA) Design Store in Omotesando and Isetan in Shinjuku as the two stores that will carry the FES Watch. It will go on sale starting Nov. 21 at the MoMA Design Store and Dec. 1 at Isetan.

You may recall that the FES Watch is not a smartwatch. Its specialty is in being a digital watch with a changeable face and strap design (emphasis on design).

The company has focused on fashion and form with this particular device. It features 24 different pattern combinations in black, white, or black and white. The watch face represents the hour of the day as a number and the minute as a hand on a clock face. Varying patterns show the face with or without a minute/second frame and in black or white. It’s all very minimalist.

The watch face measures 40mm and is only 7mm thick. Thanks to the low-power consumption of E Paper, the coin cell battery lasts approximately two months, even with the band and face patterns always on.

The FES Watch is priced at ¥29,700 (about $242) and will be available online at the MoMA’s Japanese store, as well as First Flight. There is no official information as to additional stores carrying the watch. However, Sony did mention that it plans to bring the FES watch to other stores in the future.

2 replies on “Sony’s E Paper watch finally on sale at retailers, but in limited release”