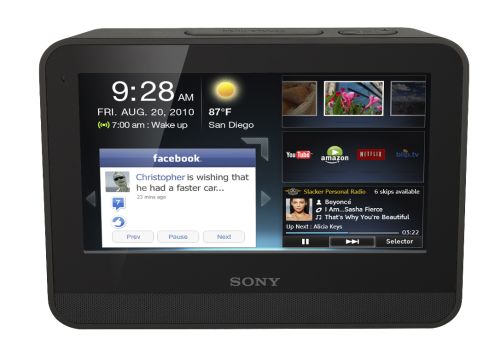 For a brief second, I looked at this headline from Engadget and thought that Sony launched a new $199 web tablet to undercut the soon-to-be-(probably)-announced Apple Tablet. And then I looked closer and realized that Sony’s new Dash Internet Viewer is more of an HP DreamScreen competitor.

The Dash can be propped up like a photo frame or laid down flat. It apparently has some sort of battery, unlike the DreamScreen. But it’s not clear how long that battery lasts and whether the Sony Dash is meant for use outside of the home. Update: Nope, there’s no battery. The Dash needs to be plugged in to work.

The device has WiFi capabilities and a 7 inch touchscreen display. It runs a custom, widget-driven OS and it’s meant to work like an appliance, not a computer with a desktop operating system. Oh, and it will run Chumby widgets, which is pretty awesome, because there are more than a thousand already available including weather, news, music, video, game, social networking, and photo applications. Sony will also be making its own widgets available with access to things like Sony music videos and movie trailers.

The Dash can handle multitasking, which means you can listen to internet radio while looking at pictures or set your alarm clock to play an online video. There’s a USB port for connecting external devices and a headphone jack for not annoying the person sitting next to you.

The Dash will be available in April for $199. You can find more pictures after the break.

7 replies on “Sony’s Dash is a supercharged photo frame, not a web tablet”