Sony’s latest tablet and convertible PCs are now available in the US.

The company’s Sony Vaio Flip PC convertibles are laptops that bend over backward to become tablets (just flip the screen over and rest it on top of the keyboard), while the Vaio Tap 11 is Sony’s answer to the Microsoft Surface Pro — a tablet featuring a high-resolution display, pen input, and a wireless keyboard cover.

The Sony Vaio Tap 11 is now available for $800 and up, while the Vaio Flip PC convertibles have prices starting at $750.

Sony also has a new 21-inch all-in-one PC/tablet called the Vaio Tap 21 which should be available soon for $1000 and up.

The Vaio Tap 11 is a pretty interesting alternative to the Microsoft Surface, featuring an 11.6 inch, 1920 x 1080 pixel IPS display, support for finger or pen input, and a choice of Intel Core i3, Core i5, or Core i7 mobile Haswell processors. 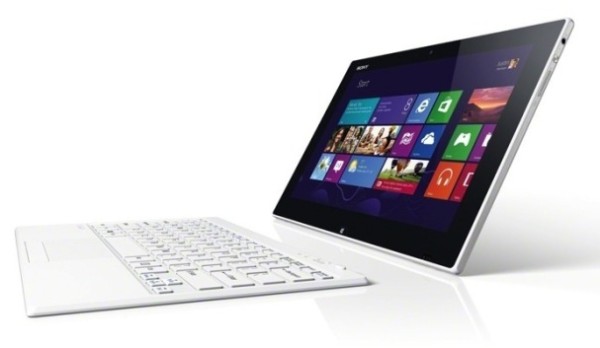 The starting price is probably the most compelling feature. Sony’s not exactly known for offering bargain devices, but at $799 with the keyboard case included, the Vaio Tap 11 is significantly cheaper than a Surface 2 Pro tablet with a Haswell processor, which sells for $899 and up (not including the keyboard cover). That said, Microsoft’s entry-level model does have a faster Core i5 processor than Sony’s entry-level model.

The Vaio Flip family of convertible tablets come in a range of sizes and configurations. The smallest models feature 13.3 inch displays and weigh 2.9 pounds, while there are also 14 inch, 4.3 pound versions and 15.6 inch, 5.1 pound models.

All models feature full HD 1920 x 1080 pixel IPS touchscreen displays with support for finger or digital pen input and a choice of Intel Core i3, Core i5, or Core i7 processors.

Some configuration options are only available in some sizes. For instance you can get a slower Intel Pentium 3556U chip (and save a few bucks) with the 14 inch model. The 15.6 inch model is the only one to offer a high-resolution 2880 x 1620 pixel display and optional NVIDiA GeForce GT 735M graphics.

The 14 and 15 inch models are also available with a choice of hard drive, solid state drive, or hybrid storage, while the 13 inch model is SSD-only.

You can find more details in the press release.