Sony unveiled its new 10.3 inch Digital Paper device in Japan last month, and now the company has announced that it’s coming to America this summer.

The Sony DPT-C1 is a slate that measures 0.23 inches thick, weighs about half a pound, and which has a 10.3 inch, 1872 x 1404 pixel E Ink display. It supports touch input and comes with a stylus allowing you to jot notes, highlight text, or draw pictures.

It’s up for pre-order from Amazon and B&H for $600, and the Sony DPT-C1 is expected to start shipping June 21st. 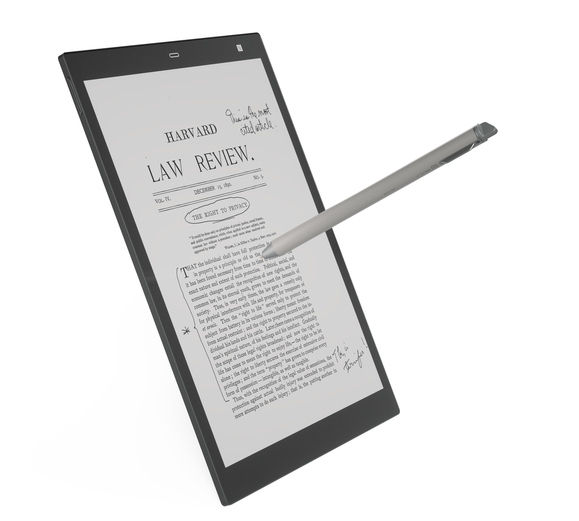 The new device is about $100 cheaper than Sony’s other current Digital Paper device, the 13.3 inch DPT-RP1, which sells for $700. Sony says the larger model is “letter-sized,” while the new, smaller version is “notebook sized.”

Both have sunlight readable displays, long battery life, and a non-slip surface that Sony says provides a paper-like writing experience. The included stylus also comes with two different tips, one offering a paper-like feel, and the other designed to be more pen-like.

The Digital Paper devices have 16GB of built-in storage, 802.11ac WiFi, and Bluetooth 4.2, as well as updated software that includes new features including automatic page rotation, support for interactive PDF and smart forms, and a page thumbnails mode that lets you see up to 16 pages at once.

Sony also offers a Digital Paper Mobile app for Android and iOS, allowing you to transfer documents between a Digital Paper tablet and your phone, and Windows and Mac users can save documents, web pages, or other content as a PDF and transfer it to Digital Paper for viewing or marking up on the go.

It seems like it’d be easier just to transfer your documents to a computer first and then connect that to a projector.