There are a lot of portable projectors that use Google’s Android operating system to let you beam apps like Netflix, YouTube, or Angry Birds to a wall or screen.

Sony’s Xperia Touch is something a bit different: it’s not just a projector that runs Android. It also has sensors that supports 10-point touch detection… so that when you beam an Android environment on a tabletop or wall you can actually interact with apps using your fingers, just as if you were tapping and swiping on a touchscreen display.

Basically it provides an Android tablet-like experience through projection… along with a bunch of other special features. But that functionality doesn’t come cheap: The Sony Xperia Touch launched in Europe this summer for €1,500 and now it’s coming to the United States for $1,700. 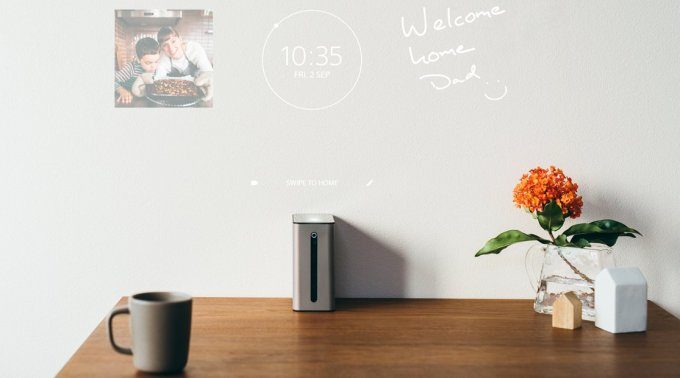 The device is an ultra short-throw 100 lumen laser projector with a resolution of 1366 x 768 pixels and support for displaying images between 23 inches and 80 inches on any flat surface.

It uses its IR sensor to detect touch input, and has a presence sensor that can automatically wake the projector when you walk near it… allowing the projector to show the time, weather, and notifications from your Android apps when you walk by, for example.

Under the hood it features 3GB of RAM, 32GB of eMMC storage (plus a microSD card slot), HDMI and  the device features USB Type-C ports, 802.11ac WiFi, Bluetooth 4.2, and NFC support, and has a 13MP camera and stereo speakers.

It measures 5.6″ x 5.3″ x 2.7″ and has a battery that’s good for up to an hour of video playback time. This isn’t meant to be a projector that you use to display feature-length movies on the go, but the battery means you can pick it up and carry it around with your or use for a little while without plugging in a power cable.

The Xperia Touch ships with Android 7.x Nougat software and features Google Assistant integration, allowing you to use it like an expensive alternative to a Google Home smart speaker.

In some ways, this is the sort of device that’s more than the sum of its parts: it’s hardly the best Android device money can buy and it’s certainly not the best projector. But Sony is sort of creating a new product category by combining a projector, touch input, and Android. Does any of that justify the $1700 asking price? I guess that depends how much money you’re willing to spend on an experimental new product that probably won’t be able to run the latest version of Android in a few years.