Sony is apparently planning to launch a second-generation Android tablet in September with a starting price of $399.99. Like the Sony Tablet S, the new model will be a PlayStation Certified device, which means that users will be able to download and play a number of PlayStation games on the tablet in addition to thousands of Android apps and games from the Google Play Store.

But the new tablet is thinner, lighter, and faster than the Sony Tablet S, and offers a number of new features. 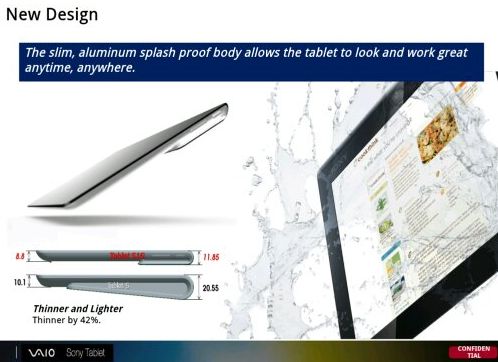 According to leaked documents that showed up at the xda-developers forum recently, Sony is moving its Android tablets into its Xperia product family. That means the company’s smartphones and tablets will have the same branding, but while the phones are aimed at mobile use, Sony wants to capture the living room with its Xperia tablet.

The Xperia Tablet will have a 9.4 inch, 1280 x 800 pixel display, but it drops the wedge-shaped design of the Tablet S. It’s thinner all around, measuring less than 12mm, or about half an inch thick at the thickest point. The Sony Xperia Tablet does still look a bit like a folded magazine, with one end of the tablet offering a slightly thicker area that you can use to grip the device in one hand.

The new tablet has a 6000mAh battery, which Sony says should provide up to 10 hours of battery life. It will run Google Android 4.0 or later when it launches later this year. 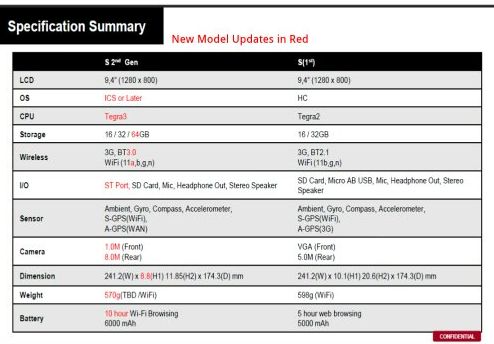 Sony is also apparently working on new features and new accessories. The Xperia Tablet will feature a Guest Mode which lets you create a custom home screen for guest users which is different from the “Owner mode” screen. You can also use his for kids or other members of your family.

Optional accessories will include a charging cradle, speaker dock, a docking stand, a 3-angle tablet stand, and 7 carrying case options in different colors and materials including fabric and leather.

There’s also a “cover with keyboard” which looks an awful lot like Microsoft’s keyboard cover for the upcoming Surface tablet.

We first saw evidence of Sony’s new tablet earlier this month when it passed through the FCC website. But the leaked product slides at xda-developers leave little to the imagination. I wouldn’t mind seeing some higher resolution photos though.