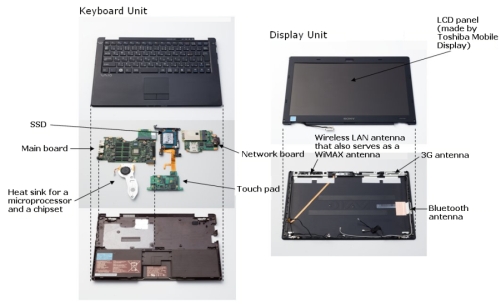 The Sony Vaio X is a thin, light and expensive notebook. That last descriptor is the reason I haven’t covered the laptop very much at Liliputing. It’s hard to compare a $1500 machine to a $300 netbook, even if the Vaio X does have a relatively slow Intel Atom Z550 processor. But while the Vaio X does seem overpriced, the folks at TechOn took one apart recently, had an engineer take a look at the innards, and concluded that the laptop is probably about twice as expensive to assemble as a typical notebook.

Does that mean it’s worth paying $1500 for a laptop that’s just marginally faster than a netbook? Probably not, especially since assembly costs would still probably be just around 15% of the total cost of the notebook. But if you read TechOn’s detailed breakdown, at least you’ll know what you’re getting for your money.

The long and short of it is that the laptop’s 0.55 inch thickness isn’t its only impressive quality. The internal components are well positioned, and well insulated. By mounting all of the components on one side, Sony was able to save space and keep the laptop slim. But it’s apparently more difficult to assemble a computer this way, and some of the components appear to have been attached by hand.