Sony was one of the first companies to introduce an all-in-one desktop computer that could also be used like an enormous tablet. Now the company is back with a second-generation model, and while it has a bigger display than last year’s Sony Vaio Tap 20, the new Vaio Tap 21 is about 30 percent lighter. 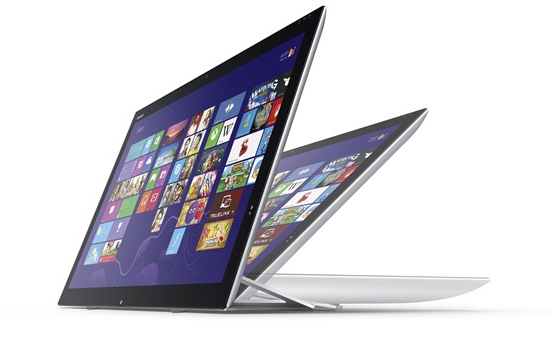 Don’t get me wrong — at 8 pounds, the Sony Vaio Tap 21 isn’t exactly as portable as an iPad. But it should be a bit easier to lug around the house. It’s also about 50 percent thinner.

Basically you can set it up on your desk, plug in a keyboard and mouse and use it like any PC. But you can also pick it up and carry it to your living room or bedroom to watch videos, or place it flat on a table to play digital board games.

The Tap 21 has a a capacitive touchscreen display and a battery which offers a few hours of run time in tablet mode. It features an Intel Core i5 or Core i7 processor and support for a solid state drive or hard drive.

Sony hasn’t yet announced the price or launch date for the Tap 21.

via CNET and PC Magazine

2 replies on “Sony Vaio Tap 21: A bigger, but lighter tablet”