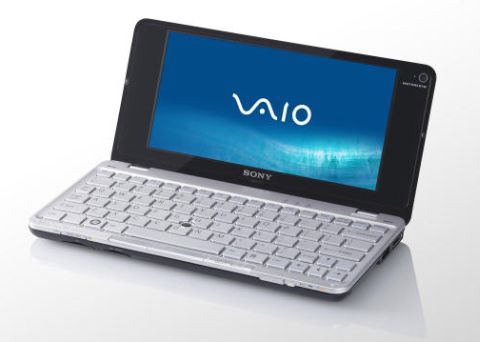 It’s official. Sony has lifted the embargo on the Sony Vaio P subnotebook and it’s one of the most intriguing mini-laptops launched to date. It also has a very unusual combination of features – many of which just don’t make a whole lot of sense when you put them together. For instance, the machine has a very wide screen 8 inch display which allows the mini-laptop to be smaller and lighter than many of its peers. But it also has a blindlingly high pixel resolution of 1600 x 768.

I can’t for the life of me imagine why you would need that many pixels on such a small display. I used an HP 2133 Mini-Note for a few months, and found the 1280 x 768 pixel resolution, 8.9 inch display almost too sharp to use unless you do some serious font tweaking.

Anyway, the point is kind of moot for me because Sony has priced the Vaio P far outside of the normal netbook spectrum. Prices will start at $899 and go all the way up to $1499.

So what exactly do you get for the money?

Sony offers a 3 cell battery that it claims will provide up to 4 hours of life, or an optional 8 hour, 6 cell battery for an extra $129. The keyboard is 88 percent the size of the Sony Vaio TT keyboard (which is already smaller than a normal keyboard), and it has a pointing stick instead of a touchpad.

The company has crammed a few other premium features in this machine to set it apart from the netbook crowd. It comes with an integrated GPS unit and EV-DO 3G wireless broadband support.

It also has an instant on feature that will let you load a limited environment (similar to the one you can find on a PSP or Playstation) that will let you access photos, video, or music or launch a web browser without loading Windows Vista.

All in all, it looks like Sony has decided to opt out of the whole race to the bottom thing that Asus started with the launch of the first Eee PC last year. Instead of offering consumers yet another cheap little laptop, Sony is releasing a yet another high end ultraportable. It’s certainly a nice looking machine, and the instant-on features and  the incredibly high resolution display on a 1.4 pound 8 inch display are things I haven’t seen before. But I’m not convinced there’s actually a market for this type of device, while Asus, Acer, and others have shown that there is a demand for low end machines.

I’ll probably try to get some hands on time with the Vaio P while I’m here at CES because I can. But I don’t expect to be covering this device in the future.

Update from the Engadget live blog: The Vaio P will be available tomorrow at SonyStyle

Update 2: Engadget has some hands-on photos

11 replies on “Sony Vaio P gets real, and expensive”