Sony offers a slider-style Windows 8 computer that you can use as a notebook or a tablet by sliding out a keyboard from behind the screen. It’s called the Sony Vaio Duo 11, and it sells for around $1155 and up.

But if you’ve been holding out for a slider with a larger screen, it looks like a 13 inch model might be on the way. 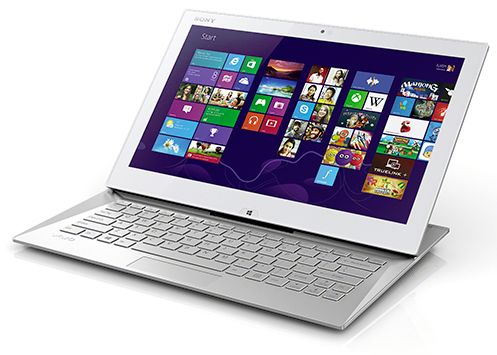 A tipster has posted details in the Notebook Review forum. Apparently training materials sent to workers at Dixons in the UK describe a slider-style WInodws tablet with a 13 inch screen, an HDMI port, SD card slot, backlit keyboard, and up to 10 hours of battery life.

Sony is also apparently adding a small touchpad below the keyboard — the Sony Vaio Duo 11 has an optical pointing button in the center of the keyboard instead.

Like the 11.6 inch model, the Vaio Duo 13 appears to have an active digitizer as well as a capacitive touchscreen. That means you can use the tablet by tapping or swiping your fingers across the screen, but you can also write, draw, or hover over the screen with a pressure-sensitive digital pen.

There’s no official word on the price or launch date for the new tablet.

Update: CNET says Sony will officially unveil the Vaio 13 at Computex in June.