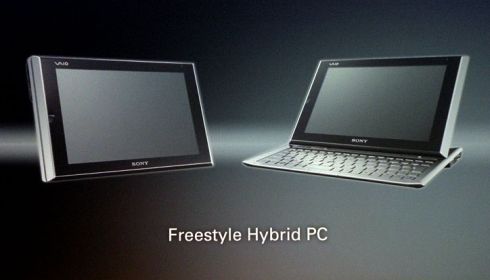 The upcoming Sony S1 and S2 Android tablets aren’t the only new touchscreen devices the company is working on. Sony also showed off a few photos of a new convertible tablet called the Freestyle Hybrid PC.

While there aren’t many details at the moment, the computer appears to have a slide-out keyboard similar to the ones found in the Asus Eee Pad Slider or Samsung 7 Series sliding tablet. This allows you to hold the Freestyle Hybrid PC like a slate or pull out when you feel the need for some serious text entry.

Akihabara News reports the computer will have an Intel Atom processor. While that would normally be a good indication that the device will run Windows, Intel has also been working with Google to bring Android to x86 chips — so anything’s possible. Odds are the tablet will run Windows if it’s released in the next few months, but if it’s due out later this year, the operating system is anyone’s guess.

Sony is also showing off a new 13.3 inch notebook it calls the Ultimate Mobile PC.