Sony’s been offering devices with E Ink displays for just about as long as anybody. But most of the company’s efforts have been funneled into the Sony Reader line of consumer-oriented eReaders with 6 inch displays and a focus on reading.

Now Sony is going after the education and business markets with a larger E Ink device aimed at reading and writing. The Sony Digital Paper is a 13.3 inch flexible E Ink prototype with a touchscreen and support for stylus input. 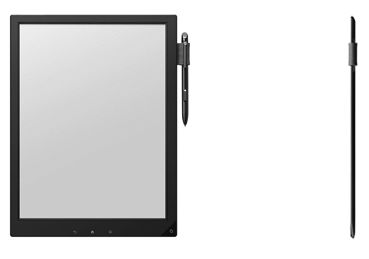 Right now Digital Paper is still in the prototype stage, but later this year Sony plans to launch trials of the device at 3 universities in Japan. The idea is to replace the need for paper with a digital medium that makes it easy to save, search, and share notes, among other things.

The Digital Paper prototype has a 1600 x 1200 pixel flexible E Ink screen, an optical touch panel and digital pen. You can create your own notes, highlight passages in a PDF file, or scribble notes in the margins.

The device features 4GB of built-in storage, a microSD card slot, and a battery that should last for up to 3 weeks. There’s also built-in WiFi. It weighs less than 14 ounces and measures about 0.27 inches thick.

via The Verge and The Digital Reader