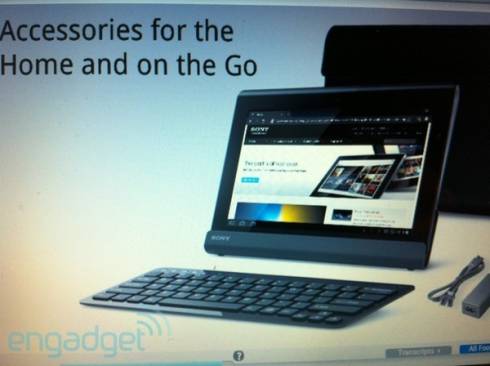 Sony has been showing off two new Android devices for a few months: The Sony S1 tablet with a 9.4 inch display and the Sony S2 dual-screen handheld device. But those names have always been code-names. Now Engadget has the scoop on the real name for the S1, along with a release date.

The tablet will reportedly be called the Sony Tablet S and it’s due out in the first half of September.

The tablet will have a 9.4 inch. 1280 x 768 pixel display, Google Android 3.1 operating system, a front-facing 3MP camera and a rear 5MP camera, and an integrated IR blaster. Sony’s tablet will have a few features you don’t find in other Android devices including the ability to send video from the tablet to a DLNA-enabled TV or set top box and support for the Sony PlayStation Suite which will let you purchase and play PlayStation games on the tablet.

Sony will also offer accessories including a docking station, wireless keyboard, and an adapter that lets you connect USB peripherals including flash drives and cameras to the microUSB port on the tablet.

There’s still no solid information on the price.