But you don’t need a slate-like PC to take advantage of Windows 8’s touch-based navigation. You can just slap a touchscreen into a standard notebook. That’s exactly what Sony plans to do with an upcoming version of the company’s Vaio T13 ultrabook. 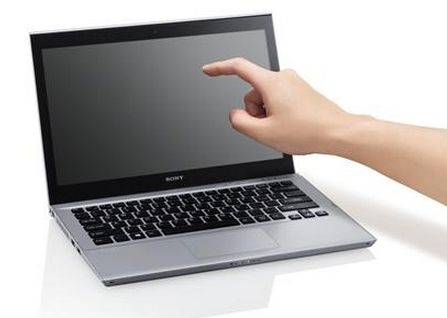 The Vaio T13 is a portable laptop that measures 0.7 inches thick and weighs 3.5 pounds. It has a 13.3 inch display, a hard drive and solid state cache, and all the usual ultrabook bells and whistles.

Sony sells the notebook for $770 and up in the US.

But TechFokus spotted a new model on display at the IFA trade show in Germany this week. It’s basically the same laptop — but it has a touchscreen display. It’s expected to launch in October for 749 Euros. There’s no word on US pricing or availability yet.

The screen doesn’t rotate or fold down over the keyboard for use as a tablet. The idea is just that you can reach up from the keyboard and touchpad and tap the multitouch screen to get things done.

Windows 8 doesn’t require a touchscreen. You can also use a multitouch trackpad to use most of the Windows 8 gestures for navigating the Start Screen or Metro-style user interface. But adding a touchscreen is a cheap way for company’s like Sony to make laptops a little more tablet-like without actually making them tablets.

Sony does have a convertible tablet in the works too though. The Sony Vaio Duo 11.6 is a tablet with a slide-out keyboard. It’s due out later this year.

Meanwhile, Sony isn’t the only company adding touchscreens to existing ultrabooks. Samsung will also roll out the Series 5 Ultra later this year, which is an updated version of the Samsung Series 5 ultrabook with a touch panel.