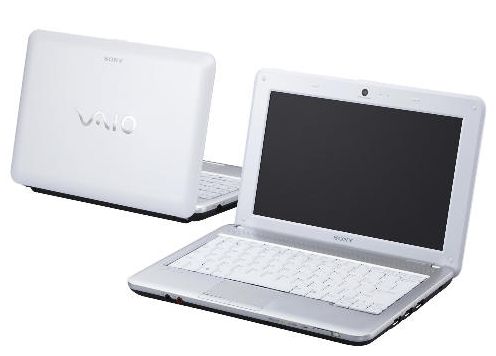 Sony’s entries in the netbook space to date have been a bit unusual, to say the least. The company’s first mini-laptop with an Atom processor had a ridiculously high resolution 1600 x 768 pixel 8.9 inch display, and a high price tag of close to $1000 to boot. The next stop for Sony was the Vaio W, which started at about $500, which is a step in the right direction, but still pretty pricey for a 10 inch netbook whose only real distinguishing features were a 1366 x 768 display and the Sony brand name. Now it looks like Sony could be prepared to launch a budget model called the Vaio M.

On the surface, the Vaio M looks identical to a Sony Vaio W netbook. But the new model appears to have a lower resolution 1024 x 600 pixel display, which will probably drive down the price a bit.

The laptop, which was recently uncovered by a member of the Notebook Review forum, will sport a 1.66GHz Intel Atom N450 CPU, 1GB of RAM, a 250GB hard drive, Bluetooth, and 802.11b/g/n WiFi. It’s likely that this is the same model that showed up on the FCC web site earlier this year.

A few UK retailers have product listings for the Vaio M. They’re not in stock yet, but it looks like they’ll sell for about £266 ($400) excluding VAT. Tesco provided the images above, although I’m not 100% certain that these aren’t just pictures of the Sony Vaio W. No word on US pricing or launch dates yet.