Sony’s newest touchscreen eReader is now available for purchase for $130. That’s about $30 higher than the starting price for an Amazon Kindle Touch or Barnes & Noble NOOK Simple Touch — but unlike those companies, Sony doesn’t offer a version partially supported by advertisements.

In fact, “Just say no to ads” appears to be a big theme on the Sony website, suggesting that one of the key differences between the company’s eReaders and its competitors is the lack of ads… even though you can get a Kindle without ads for $139, or a NOOK without ads for $99. 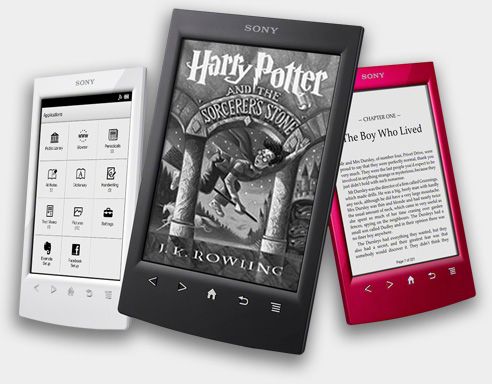 For the most part, the key difference between the new Sony Reader PRS-T2 and last year’s PRS-T1 is the inclusion of touch-sensitive buttons below the screen instead of physical buttons that you have to press.

Sony is also bundling the first Harry Potter book with the black version of the eReader. Red and white models are also available.

Engadget reports that Sony has also improved zooming and page turning, and added the ability to save passages to Facebook and Evernote.

The rest of the specs are pretty much the same. The Sony Reader PRS-T2 has a 6 inch, 600 x 800 pixel E ink display, an infrared touchscreen, 1.3GB of accessible storage, and a microSD card slot for up to 32GB of additional storage.

The eReader supports EPUB, PDF, and TX files, and can work with Adobe DRM. You can read books purchased from the Sony Reader store, NOOK store, or any other store that supports Adobe DRM, and you can also read books borrowed from any library that uses the OverDrive system, using a built-in feature that lets you browse for library books from your device.

Sony provides a few interesting touch-friendly features including the ability to look up definitions for words by tapping-and-holding a finger on a word. There’s also an included stylus for highlighting text or taking notes.

The Sony Reader PRS-T2 weighs about 5.9 ounces and gets up to 2 months of battery life (if you read for about a half hour per day).