If there are two things that smartphones can be short on, it’s storage space and battery life. Sony’s got a single answer for both problems: The WG-C10 Portable Wireless Server.

It’s a portable device that acts as a wireless storage drive for Android or iOS phones or tablets. But you can also use it as an external battery pack for recharging the battery in your mobile device when you’re not near a wall outlet. 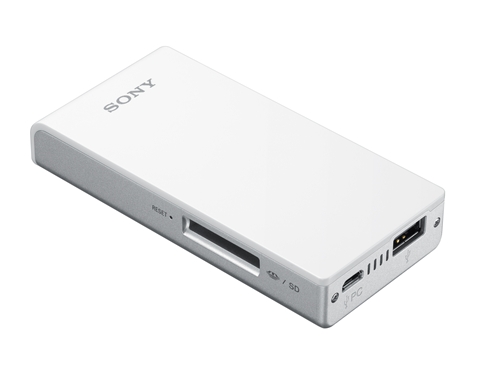 The Portable Wireless Server isn’t an external hard drive. Instead, it’s a pocket-sized box that weighs less than 5 ounces and which features USB ports and a memory card slot.

Insert a flash drive, SD card, or Sony Memory Stick Duo and you can stream audio, video, or other content from that card to your mobile device running Android 2.3 or later or iOS 5.0 or later.

In other words, in addition to using it as a way to add extra storage to your phone or tablet, you can use it as a sort of card reader for your mobile device. For instance, you can snap a photo with your camera, pop it into the wireless server and copy it to your Android or iOS device.

If you’re streaming audio to your mobile device over the 802.11n WiFi connection Sony says you should get up to 10 hours of battery life.

On the other hand, if you just want to use the built-in battery to recharge your phone’s battery, you can do that too.

Sony says the WG-C10 Portable Wireless Server will be available in Europe this summer.