Sony is joining the internet TV party with a new service that streams live and on-demand content over the internet. PlayStation Vue is now available to customers in New York, Chicago, and Philadelphia who are willing to pay at least $50 per month.

That makes PlayStation Vue significantly more expensive than Sling TV, Netflix, or other internet video services, but cheaper than a traditional cable plan… at least until you factor in the cost of your internet service (which is often bundled with cable plans). 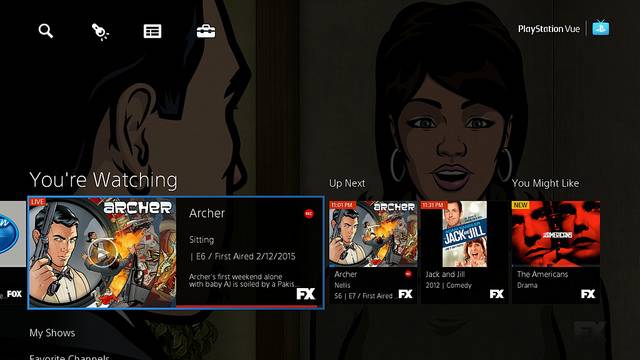 Sony’s service works with PlayStation 3 or PlayStation 4 game consoles, although support for additional devices such as iPads is on the way. One device that Sony apparently has no plans to support? The recently launched PlayStation TV.

The service includes up to 85 channels at launch including broadcast channels CBS, FOX, and NBC as well as content from AMC, Turner, Viacom, Discovery, and other networks including related channels such as TNT, TBS, MTV, FX, and Comedy Central.

While prices start at $50, you only get about 50 channels at that level. You can pay $60 for a Core package which includes additional sports channels and Turner Classic Movies. The $70 Elite package includes all the channels, including additional sports, music, cooking, and other channels.

If this all sounds familiar… that’s because it sounds an awful lot like a traditional cable or satellite TV setup. It’s just delivered over the internet.

There are a few features that help set PlayStation Vue apart from traditional TV or other internet-based video services. For instance, not only can you watch a TV show live, but you can add a show to your favorites to see any episodes that have aired within the past 28 days. Sony calls this its DVR feature, and even lets you fast forward through commercials. But you don’t need to save anything to an offline hard drive.

The bad news is this means you only get the last few episodes of each show in your DVR… which could make it tough to binge-watch an entire season all at once.

All told, the biggest question I have about services like PlayStation Vue is whether they’ll actually save you any money. US Internet service alone can cost $50 or more per month… which means that Internet + Vue can easily run well over $100. At that rate, you might as well just get a normal cable + internet bundle.

Sony isn’t the only company banking on customers being willing to pay higher-than-Netflix or Hulu prices for internet TV though. Apple is expected to launch its own TV service later this year, with prices reportedly starting at $30 or $40.

via Variety, Gizmodo, and The Verge