Sony is updating its line of professional-quality portable audio recorders with two new models, the $230 PCM-A10, which is basically a souped-up voice recorder that you could use for recording music or podcasts on the go, and the $500 Sony PCM-D10 which is Sony’s most affordable professional handheld audio recorder in years… as well as Sony’s first with XLR jacks and Bluetooth support.

No, this isn’t normally the sort of gear I write about at Liliputing, but for years I used Sony’s PCM-D50 handheld recorder for radio and podcasting work. Unfortunately it was discontinued years ago. So when some of the buttons on my unit stopped working, I eventually switched to a different recorder rather than buy an even-more-expensive Sony PCM-D100.

So I’m pretty excited to see Sony’s not only back in the game, but that the new model has a bunch of new (for Sony) features. 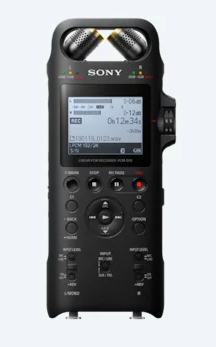 It looks like the new model is no exception. It can record at up to 192 kHz/24-bit, has a MAX9723 headphone amp and a physical dial for adjusting recording levels on the fly. The PCM-D10 also has one of my favorite features from earlier Sony recorders: a digital limiter function which records a second track 12db lower than your primary recording and automatically switches to that if the audio input is too loud and then slowly transitions back to the primary track.

While previous Sony recorders had excellent built-in microphones, they only had a single 3.5mm input for an external mic. The new model has dual XLR-TRS jacks, which means you can plug in microphones or other audio sources using XLR or quarter inch cables. The PCM-D10 can also supply 48V phantom power to microphones that use it.

There’s also a 3.5mm mini jack if you want to use it, and the built-in stereo mics are adjustable so they can point inward, outward, or forward.

The new recorder is also the first with a USB Type-C port which you can use to transfer data to a computer or connect an external battery pack (or wall jack). The recorder can also run on four AA batteries.

The Sony PCM-D10 has 16GB of built-in storage and an SD card reader for removable storage.

Sony says the PCM-D10 should be available this spring for $500, while the cheaper (and less exciting) PCM-A10 is already available for $230.