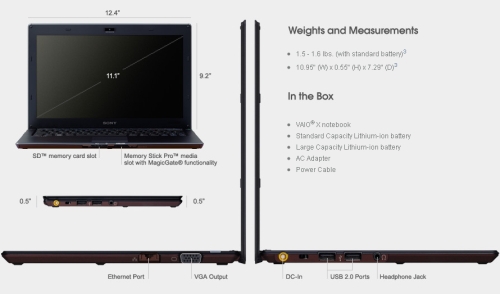 First the good news: Sony’s new Vaio X thin and light laptop won’t necessarily set you back $1500. Instead it has a starting price of $1300, which isn’t bad for a Sony Vaio laptop with a carbon fiber frame and a high performance solid state disk.

Now for the less good news: The laptop packs an Intel Atom processor. While that should certainly help in the battery life department, don’t expect the Sony Vaio X to be a high performance machine.

After teasing us with photos and a handful of specs for the last few weeks, Sony finally made the Vaio X official last night. The laptop has an 11.1 inch, 1366 x 768 pixel display and measures 10.95″ x 0.55″ x 7.29″ while weighing just 1.5 to 1.6 pounds with the standard battery. It has a 2GHz Intel Atom Z550 processor and GMA 500 graphics. It comes standard with a solid state disk ranging from 64GB to 128GB, and ships with a standard battery that’s good for up to 3.5 hours. Or you can spend some extra cash on an extended battery that can run up to 14 hours on a charge.

Laptop Magazine got a chance to spend some time with the Sony Vaio X and reports that the extended battery adds 0.9 pounds, bringing the total to about 2.4 pounds. That’s a much more netbook-like weight, but there aren’t many netbooks that get up to 17 hours of battery life. According to Laptop, the keyboard is 75% full sized, which sounds really small for an 11.1 inch laptop to me. But Laptop’s Mark Spoonauer says it’s fairly easy to type on. Gizmodo, on the other hand says the laptop has a 90% keyboard, which seems more likely based on the pictures I’ve seen.