The world probably needs another crowdfunding website about as much as it needs an meteor in the head. But that’s not stopping Sony from launching one.

There’s one key difference between Sony’s First Flight program and other crowdfunding platforms like Kickstarter, Indiegogo, and GoFundMe though: First Flight is designed to showcase ideas from Sony employees. You can’t use it to raise money for a potato salad party or a smartwatch… but you can use to help decide which projects from Sony employees should see the light of day. 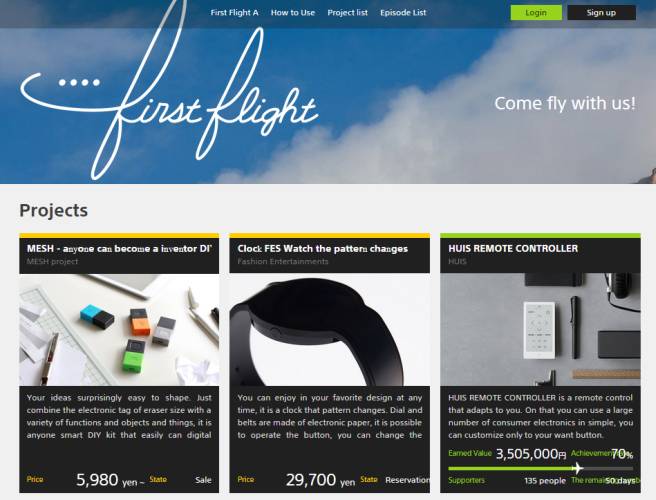 First Flight is more than just a site for raising money. It also lets developers tease ideas to gauge interest and communicate with potential customers, then raise money and eventually sell the products.

At launch the First Flight program targets Sony’s home country of Japan. The website is only available in Japanese for now.

But if you happen to be in Japan (or if you read Japanese), you can provide feedback about some of the first projects, including the MESH Smart DIY kit which lets you turn ordinary devices into smart devices by adding sensors, LED lights, or other hardware through tiny “tags,” and the HUIS customizable remote control.

Sony is also using First Flight to take orders for the FES Watch with an ePaper display (which we first saw last year).

All told, First Flight could be a way for Sony to gauge interest in new products before committing to actually bringing them to market. It could be a way to move into new device categories without committing too much money, which could be a smart move for a company that’s been struggling in recent years.

At the same time, crowdfunding is usually seen as a way for scrappy startups or inventors with little to no funding to raise money and when an enormous company like Sony tries to use the same tools, it could seem a little disingenuous: you’d think Sony has enough money to pay for a little research & development on its own dime.