Sony’s new PlayStation Vue is an internet TV service which the company is positioning as an alternative to traditional cable. Customers will get access to about 70 channels of live and on-demand content, a digital program guide, and personalized channels based on the content you like.

PlayStation Vue will be available in limited beta in New York this month, before rolling out in additional markets in early 2015. It’ll also be available only on PlayStation 3 and PlayStation 4 consoles at launch, but Sony plans to bring Vue to iPads and other devices soon. 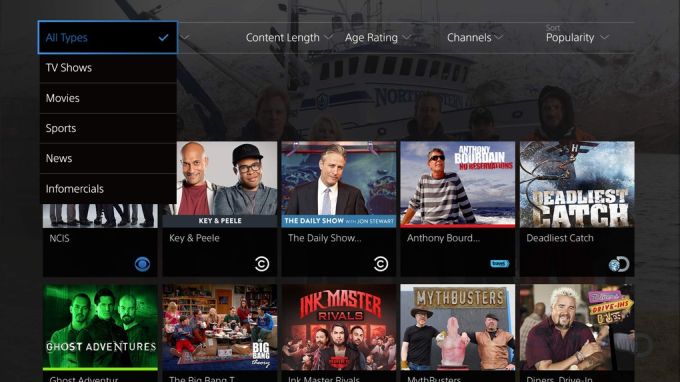 Sony has worked out deals with big names including CBS, NBC, Fox, and Viacom so there’ll be around 70 channels available initially, including Discovery, MTV, Nickelodeon, SyFy, USA, HGTV, and Comedy Central.

But Bloomberg Businessweek points out ABC, ESPN, AMC, History, and other big name channels won’t be available unless Sony reaches deals with those networks in the future.

All told, Sony seems to be using its clout to provide one of the strongest internet-based alternatives to traditional cable, satellite, and FiOS plans… but PlayStation Vue is very much in the same class as those services. It’s not a Netflix, Hulu, Amazon Prime, or Vudu-style service and it probably won’t be priced like one.

Users will be able to watch programs within 3 days of their original air date even without recording them in advance, but if you do “record” a program by saving it to the cloud, you’ll have to watch it within 28 days. You don’t get access to entire seasons of programming.

While some folks are suggesting the PlayStation Vue is aimed at so-called “cord cutters,” the truth is you’ll still need a relatively speedy internet connection actually use the service. Since many internet service providers offer discounts when you bundle TV and internet service, there’s no guarantee that you’ll actually end up paying less by switching to a service like PlayStation Vue… and it’s not clear that Sony is positioning Vue as a cheaper alternative to regular cable packages.

Sony hasn’t announced pricing yet, but the company is hoping it’ll stand out due to its convenience, personalization, and other technology-driven differences from traditional cable… not necessarily the price.