Sony’s FES Watch is a wristwatch with a customizable look thanks to an electronic paper display that can show a variety of different watch faces, and an ePaper strap which can handle a variety of designs.

Sony launched the original FES Watch using the company’s own First Flight crowdfunding platform in 2015 and began selling the watch in limited quantities later in the year.

Now the company has a new model with a more solid-looking frame, a water resistant design, and a rechargeable Lithium-ion battery (rather than the coin cell battery used in the original). 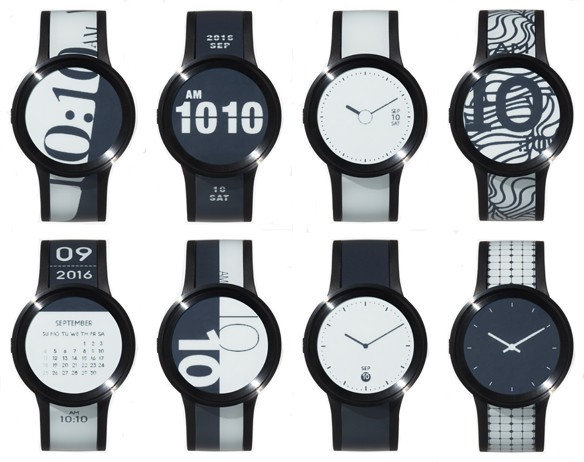 The FES Watch U is available for pre-order from First Flight for  ¥ 44,710 ($439) and up (although that price includes a 10 percent discount). Watches are expected to begin shipping in April, 2017.

The new model is available in silver, white, or black colors, and there are also “premium” versions with a combination of colors.

The monochrome ePaper display only draws power when the screen is refreshed. So once you pick a design for the wrist band, the pattern should remain in place until you change it, without running down your battery. The same sort of goes for the watch face, except that if the screen refreshes once per minute so you can tell the time, that’ll draw a bit of power.

Sony says the FES Watch U should get about 3 weeks of battery life on a charge, and it takes about 2.5 hours of charging time to refuel the battery using a charging cradle with a micro USB cable.

The FES Watch U pairs with a smartphone via Bluetooth 4.1 and it’s compatible with devices running iOS 9 or later.

Sony will probably only offer the watch in Japan at launch.