Sony has introduced an AOSP project for the company’s Xperia Z smartphone. AOSP stands for Android Open Source Project, and basically what this means is that you can run Google’s stock version of Android on Sony’s phone if you’d prefer not to use the Sony-customized version of the software.

Unfortunately at this point you’ll have to do without a modem or camera, which kind of limits the functionality. 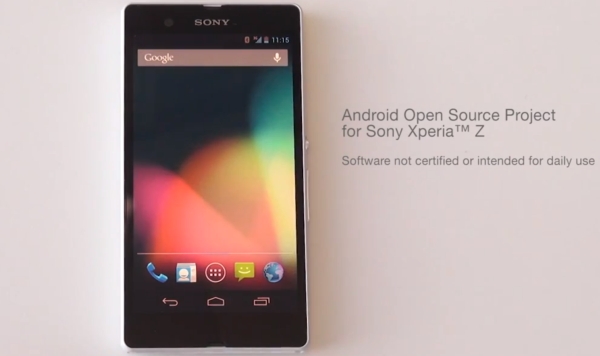 While hackers have managed to use AOSP code to build custom ROMs for dozens, possibly hundred of phones and tablets, Sony is one of the few companies to actually get in on the action itself. Sony makes it easy to install proprietary binaries needed to make sure AOSP runs on its phones, for instance.

The Xperia Z features a 5 inch, 1920 x 1080 pixel display which is resistant to water, dust, and scratches. Other specs include a 1.5 GHz Qualcomm Snapdragon S4 quad-core processor, 2GB of RAM, and a 13MP camera.

Sony introduced the phone just a few months ago, and while we’re starting to see phones with faster Snapdragon 600 chips hit  the streets, the Xperia Z is one of the most powerful phones released in the first half of 2013 so far. It’s basically what you’d get if you took the guts of a Google Nexus 4 and added a larger, higher resolution display.

At this point the AOSP code for the Xperia Z is still a work in progress. The modem and camera require proprietary binaries that Sony cannot yet release, but the company has released code supporting the WiFi, Bluetooth, GPS, SD card, LED light, and other basic functions.

Sony is also accepting contributions from community members interested in helping out with the project.