Sony has been selling a line of Digital Paper tablets with large E Ink displays for much of the past decade. Now the company is jumping on the latest trend in E Ink devices: color.

According to a report from Good e-Reader, the new Sony DPT-CP1 v2 is an upgraded version of a 10.3 inch grayscale device Sony released a few years ago. The new model has a faster processor, more storage space, and a USB-C port, among other improvements. But the two biggest changes are related to its display.

First, the new model features an E Ink Kaleido color display. Second, it has a Wacom digitizer, which means it should support pressure-sensitive input from a wide variety of digital pens on the market. 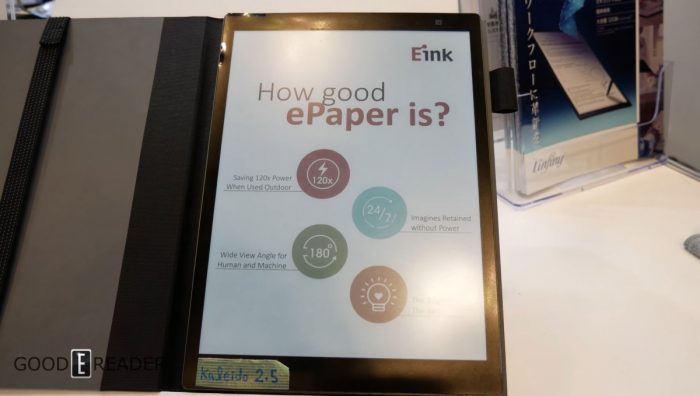 It also has the latest E Ink Kaleido display technology, which can show up to 4096 colors at a reduced 100 pixels per inch, due to the way that color is implemented with a filter laid on top of an E Ink screen.

Sony has also added a front-light, making the new DPT-CP1 the company’s first Digital Paper device to feature an illuminated display. It has 27 white LED lights that should make it easier to use in dark or dimly lit environments, while also helping black and white color content stand out even in brighter settings.

Other features include a 1.8 GHz ARM Cortex-A53 octa-core processor, 32GB of storage, WiFi, Bluetooth, and a USB-C port.

The device is running a custom build of Android 9 that comes with a few apps pre-installed including an app for taking notes or drawing pictures and security software. Good e-Reader reports that there’s officially no support for side-loading third-party apps, but I suspect that it’s just a matter of time before users figure out how to make that happen.

There’s no official word on the price or release date, but Sony is said to be initially targeting government and medical customers in Japan, with the company showing off the upcoming DPT-CP1 v2 at Japan’s Government & Public Sector Week show in Tokyo.