There are a lot of ways to make music with a computer… and the computer doesn’t even need to be all that powerful. You can even use synthesizer software to play tunes on a $5 Raspberry Pi Zero (although you’ll obviously need to spend a few bucks on speakers, a display, a mouse, and a keyboard).

I’ve been thinking a lot about ways to generate music digitally, ever since I decided that my acoustic guitar wasn’t going to be much help in writing a theme for the LPX Show.

So far, I’ve mostly been using mobile sequencer apps, because making patterns on a touch screen just feels right. But you can also make music by writing words… or rather, lines of code. 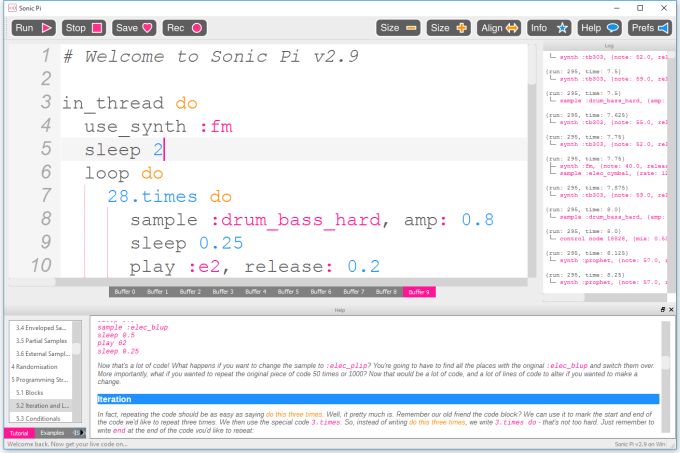 It’s been around for a little while, but I just discovered it today, installed it, and started following the tutorials to learn how to create a drum track, play tones, alter the sound of those tones, introduce samples, and… next thing I knew it was nearly 2 hours later.

In other words, it’s a lot of fun… and while it probably helps if you have a basic understanding of music composition, you can learn a lot just by playing around with the code samples included in the program… or the samples from the Sonic Pi website or other locations.

Personally I know a little bit about music, but very little about coding. So for me, Sonic Pi also serves as sort of introductory course in entering a series of commands, correcting your mistakes, and experiencing the output in a nearly real-time fashion.

Speaking of real-time, the reason Sonic Pi is considered a “live coding” synthesizer is that you can make changes to a song while it’s playing to introduce an element of live performance.