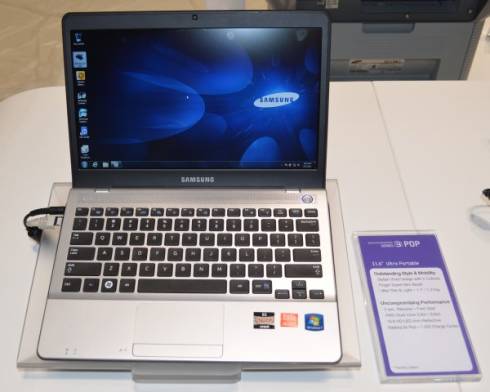 Last month Samsung started selling its Series 3 notebooks with screen sizes ranging from 11.6 inches to 15.6 inches. But so far we’ve only seen the smaller laptops with Intel processors. Now it looks like Samsung will be offering an 11.6 inch model with an AMD Fusion processor in some regions.

The company is showing off the new Samsung Series 3 Pop notebook at the IFA trade show in Berlin this week, where nDevil spotted it on the show floor.

So far it doesn’t look like Samsung plans to offer AMD versions of its 12.5 inch or larger Series 3 notebooks.

CNET Asia has an overview of the AMD-powered laptop, and reports that it will ship in Singapore. It’s not clear whether you’ll be able to get the AMD powered version in any other countries.

In the US the Samsung Series 3 11.6 inch notebook is powered by a 1.2 GHz Intel Pentium 957 dual core processor and it’s available exclusively from Staples.