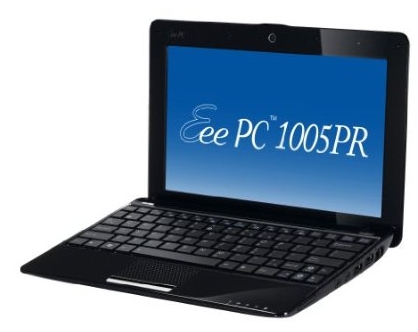 The Asus Eee PC 1005PR has been available for a few weeks, but a handful of early reviews on Amazon are less than positive. Here’s the deal: The Eee PC 1005PR looks a lot like other 10 inch

netbooks from Acer, but it has two features that make it stand out from the crowd. First, it has a 10.1 inch, 1366 x 768 pixel HD display. And second, it has a Broadcom Crystal HD video accelerator. But some users are claiming

that the Broadcom accelerator isn’t installed or isn’t working properly.

Asus has been looking into the issues, and it seems that while every 1005PR unit that’s shipped does have a Broadcom Crystal HD Accelerator on-board, at least two returned units turned out to have loose daughterboard cables. Several other units have been returned to Asus, and at least three of those were netbooks that users had upgraded from Windows 7 Starter Edition to Windows 7 Home Premium or Windows 7 Ultimate. It turns out that if you upgrade the operating system, you’ll need to reinstall the Broadcom drivers.

It’s not clear what percentage of Eee PC 1005PR units have issues, but I’ve asked Asus to give me a rough idea of how many Eee PC 1005PR models have been sold so far. But so far, it sounds like things might not be quite as bad as some Amazon.com commenters are making them out to be — the netbooks aren’t shipping without the proper hardware. The fact that some are shipping with loose cables, on the other hand, is a bit troublesome.