Most existing smartphones use Lithium Ion batteries… which are based on battery technology that hasn’t really changed much in recent years. So while phone makers try to improve battery life by choosing energy efficient components, the best way to make a phone last longer is to use a bigger battery.

But starting in 2017, there may be another way. That’s when SolidEnergy plans to begin shipping a new type of battery that offers twice the energy-density of a typical Lithium Ion battery.

In other words, phone makers will be able to use batteries that take up half as much space, while providing just as much power. Or they can keep the physical size of the batteries the same, but offer twice as much run time. 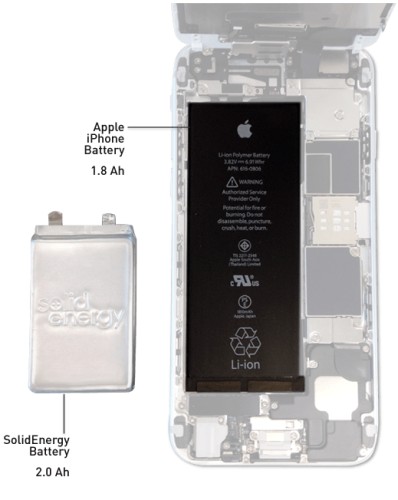 SolidEnergy’s batteries use lithium-metal foil rather than the graphite used by most Lithium Ion batteries. The company says the foil can hold more ions, which means more energy can be packed into the same amount of space.

But the batteries are similar enough to Lithium Ion batteries that they can be manufactured using the same equipment… which should hopefully help keep the costs from getting too high.

In 2018 SolidEnergy plans to product batteries for electric cars. But the company is starting with batteries for drones in November, 2016 and smartphone and wearable batteries in early 2017.

There’s no word on how much the new batteries will cost or if SolidEnergy has lined up any major buyers for its technology. We do know that in 2015 the company was planning to develop batteries for Google’s Project Ara modular smartphone… which also happens to be scheduled for a 2017 launch. But I suspect Google’s modular smartphone will be a niche player in the smartphone space for the foreseeable future.