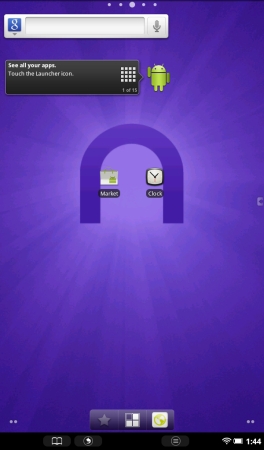 The Barnes & Noble NOOK Tablet is a 7 inch tablet with a color display, a dual core processor, and a custom version of the Google Android operating system designed by Barnes & Noble. While the tablet can run hundreds of thousands of Android apps, out of the box it’s designed for reading eBooks from B&N, streaming videos from Netflix or Hulu, and running third party apps downloaded from the B&N Shop.

But since the NOOK Tablet hit the streets in November, hackers have been figuring out ways to do more with the tablet. People have rooted the tablet, figured out how to sideload apps, installed the Google Android Market, and blocked B&N software updates that make it tougher to do those things.

Now xda-developers forum member cfoesch has put together a new tool that packs some of the best NOOK Tablet modifications into one tool.

It’s called Snowball-mod, and it’s the closest thing to a custom ROM available for the NOOK Tablet. Since the tablet’s bootloader is locked, it will probably be a while before someone figures out how to actually load a custom ROM on the tablet and replace Barnes & Noble’s software entirely.

Here are some of the things Snowball-mod does:

Snowball-mod also includes hacks that lets you access the 12GB of storage that are normally reserved for B&N apps, but most third party apps won’t recognize this space.

You’ll need to start with NOOK Tablet OS 1.4.0 to install Snowball-mod. It’s not available for OS 1.4.1, but you can roll back to 1.4.0 by performing a factory reset. That will erase all of your data, but installing Snowball-mod will do that anyway.

It’s important to note that while this hack will make the NOOK Tablet feel more like a full-fledged Android tablet, it also removes access to the default Barnes & Noble applications. You can still read books by installing the Android Market and downloading the NOOK app, Kindle app, or other eReader app. But Snowball-mod isn’t designed for people that want to keep the original NOOK Tablet experience.

The utility also incorporates a cool new SystemUI replacement from revcompgeek which does two things:

You can also install the SystemUI replacement on any NOOK Tablet which has been rooted. You don’t need to use Snowball-mod if you only want to turn n button into a home button, for instance.