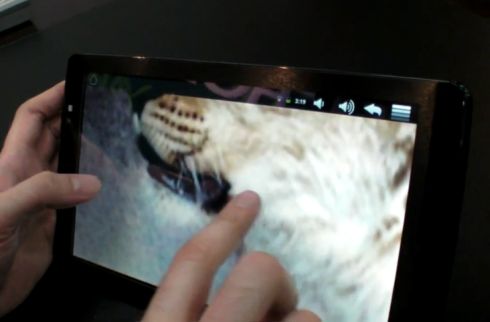 The Archos Arnova 10 is one of the cheapest 10 inch Android tablets around, but the current model is hampered by a resistive touchscreen display and a relatively slow processor. But Charbax from ARMdevices got a chance to check out a new version of the Arnova 10 which has a faster processor and a better touchscreen.

The updated Archos Arnova 10 will have a 1.2 GHz RockChip RK2918 processor — the same chip found in the new version of the Archos 7c Android tabelt. It also has a 10.1 inch capacitive touchscreen display and runs Google Android 2.3.

The tablet supports 1080p HD video playback, and has better viewing angles than the original Arnova 10 when viewed from the left or right. Tilting the tablet back tends to lead to washed out colors.

The difference between a resistive and capacitive display is that resistive touchscreens recognize taps from a fingertip, stylus, or other item with a thin edge, while a capacitive touchscreen recognizes the electric impulse from your fingertip make it easier to interact with the screen using a light touch. The new tablet also supports multitouch gestures.

Charbax reports that the tablet will cost around $230 when it hits the market.