It’s been nearly 20 years since I last used a pager, but there are still times that I miss its simplicity. Hardware hacker and medical doctor Philippe Cadic wants to bring them back, albeit with some more modern functionality. 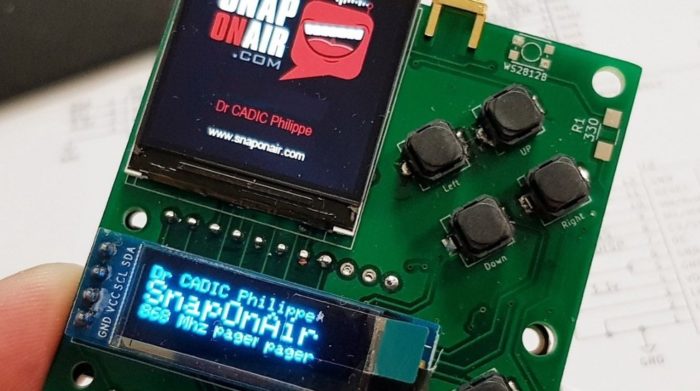 Dr. Cadic is the driving force behind SnapOnAir, a project aimed at building open source, open hardware, peer-to-peer communication devices that operate on LoRa frequencies. His latest creation is the dual-screen pager you see above: the SnapOnAir DUO.

The DUO features a 1.3″ IPS display that handles the bulk of the visuals. Below it sits a .9″ OLED touchscreen that provides diagnostic readouts and provides an on-screen keyboard. The DUO also features four directional buttons for scrolling through screens and it all connects to an inexpensive TTGO ESP32 dev board.

Like Dr. Cadic’s other SnapOnAir devices, the DUO is built for mesh communications and utilizes a LoRa modem. In testing, Semtech’s LoRa technology can transmit messages over distances of up to one kilometer. It all happens without pinging a cell tower or hopping on a Wi-Fi network.

It’s just what the doctor ordered for a gadget that’s aimed at groups that need to stay in touch at all times — even when infrastructure fails or doesn’t exist. SnapOnAir communicators would be a good fit for first responders in disaster sites or doctors and nurses working in developing areas.

Since he started tinkering two years ago, Dr. Cadic has designed 5 different SnapOnAir communicators. He sees creations as offering people a truly free way to communicate.

His inspiration comes from bulletin board systems and FidoNet, which, apparently, he was using around the same time that Brad and I discovered the Cleveland Free-Net.