The Snakebyte Vyper from Sunflex is a 7 inch Android tablet which comes with a docking station and wireless remote control that lets you use it to run Android apps and games on your TV. It’s expected to go on sale in limited quantities in December for $200 and up, and the makers of the tablet expect to distribute it through Amazon, Best Buy, GameStop and other retailers by January.

If the concept looks familiar, that’s because the Snakebyte Viper is a new name for a product Sunflex has been showing off since January. Up until now it had been called the unu, but apparently Snakebyte Vyper was easier to trademark. 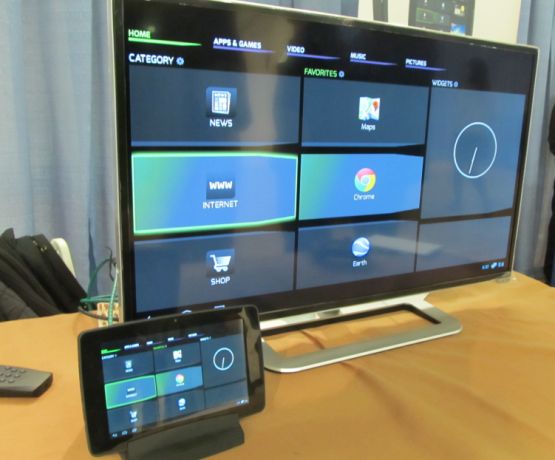 There are microSD and HDMI ports on the tablet, as well as a front-facing speaker. But what really sets the Snakebyte Vyper apart from other tablets are the accessories.

For $200, you can pick up a Media bundle, which includes a TV dock and a wireless remote. There’s also a $250 Gaming bundle which includes those accessories, plus a wireless game controller and a travel pouch.

When you drop the tablet into the dock, a message will pop up asking if yo’u want to keep the display on or not, so you have the choice of viewing everything on both the tablet and your TV or just on your TV. You can then use the wireless remote as an air mouse or as a thumb keyboard, letting you play casual games like Angry Birds, surf the web, or control media playback.

The game controller works with games that already support external gamepads, and there’s a button mapping tool for game that are designed to be used with touch.

Unlike some Android TV game consoles such as the GameStick or Ouya, the Snakebyte Viper comes with full access to the Google Play Store, which means you should be able to run pretty much any Android app on it — although some may work better than others on your TV screen. Sunflex does have a custom app launcher which is designed to make Android a bit easier to navigate on a big screen, but there’s no getting around the fact that some apps are clearly designed for phones, not TVs (or even tablets, for that matter).

Still, if you’re not sold on the idea of buying an Android game console that only works with your TV, the Snakebyte Vyper looks like an interesting alternative to microconsoles like the Ouya.